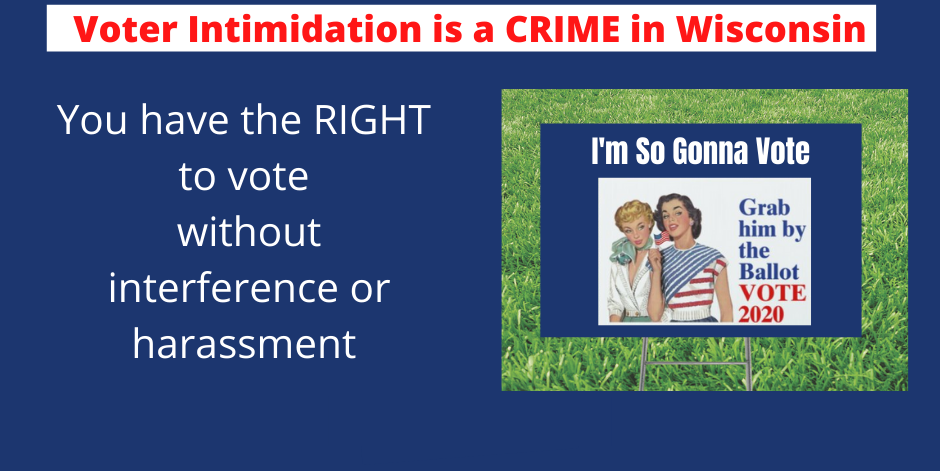 In Wisconsin, Voter Intimidation is a Crime

You have the right to vote without intimidation or harassment

Wisconsin Attorney General Josh Kaul said the Wisconsin Department of Justice (DOJ) is preparing for the upcoming election on November 3, 2020. The attorney general also issued a reminder that voter intimidation is against the law.

“The Wisconsin Department of Justice is working with other agencies to ensure that we have a fair election. It is critical that every lawfully cast ballot is counted and that voters feel safe at their polling locations,” said Attorney General Kaul. “Voter intimidation is illegal. If someone breaks the laws that protect against voter intimidation, they should be prepared to spend time behind bars.”

Voter intimidation is a crime. Wisconsin law prohibits anyone from using or threatening force to compel someone to vote, to keep them from voting, or to influence their voting decision. Wisconsin law also prohibits anyone from using duress or fraud to impede or prevent someone from freely exercising their right to vote. The law not only prohibits individuals from taking any of these actions personally, but it also prohibits individuals from having a third party take these actions.

What to do if you witness or are a victim of voter intimidation:

If you witness or are subject to voter intimidation, alert an election official and call local law enforcement immediately:

In the city of Kenosha dial the police non-emergency number (262) here.

Report all instances of voter intimidation or threats of violence with as much detail as possible to the Voter Protection Hotline at 608-336-3232 here.