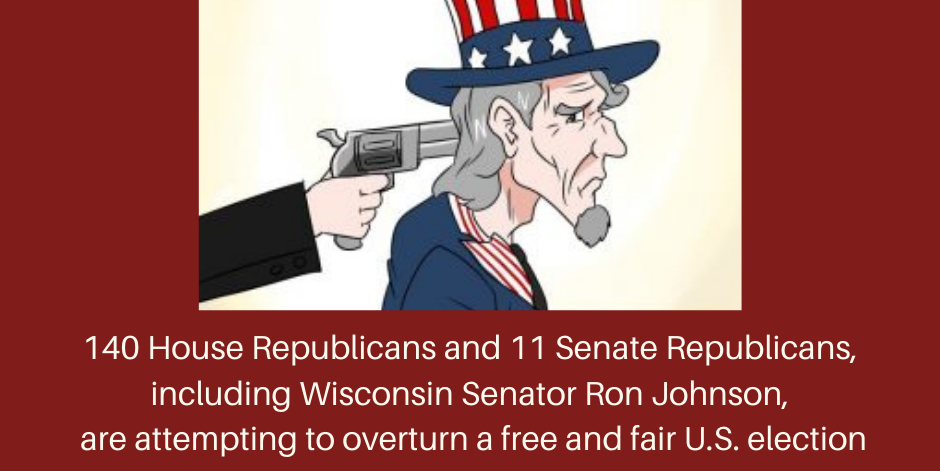 Sen. Ron Johnson is the only Senate Republican attempting to overthrow his own constituent's presidential votes

"If conservatives become convinced that they cannot win democratically, they will not abandon conservatism.

They will reject democracy."

-David Frum, 2018 from his book Trumpacracy: The Corruption of the American Republic

Joe Biden won the U.S. Presidential election by a 4.5-point victory margin, the second largest since 2000. Only Barack Obama's 7-point win in 2008 was bigger.

Biden won by a margin of 7 million popular votes. The 81 million votes Biden won is by far the most any presidential candidate has ever received.

After bringing over 60 lawsuits, and even offering financial incentive for information about fraud, Trump and his allies failed to produce evidence in court that voter fraud was responsible for Trump's election loss.

In fact, the two people who have been charged with election fraud during the 2020 election both indicated they voted for Trump.

Trump's own Attorney General, the head of his Department of Justice, said their investigations turned up no widespread voter fraud. William Barr stepped down from his role as AG after his statement enraged Trump.

Trump's own Director of the Cybersecurity and Infrastructure Security Agency in the United States Department of Homeland Security stated the U.S. election was the most secure in U.S. history. Chris Krebs was fired from his role after his statement enraged Trump.

Yet even with no evidence, with hand and machine recounts verifying the accuracy of the election results, with state Election Commissions made up of both Republicans and Democrats and both Republican and Democratic Governors certifying the accuracy of Joe Biden's win, Republicans in the House and Senate, including Ron Johnson, have indicated they will attempt to overthrow the will of the people and place their candidate in the White House instead of the democratically elected winner, Joe Biden.

David Frum was right: "If conservatives become convinced they cannot win democratically, they will not abandon conservatism. They will reject democracy."

U.S. Sen. Ron Johnson from Wisconsin to join 10 others from GOP in refusing to certify Electoral College results

The size of Joe Biden’s victory matters. And it is huge.

Trump’s Fraud Claims Died in Court, but the Myth of Stolen Elections Lives On