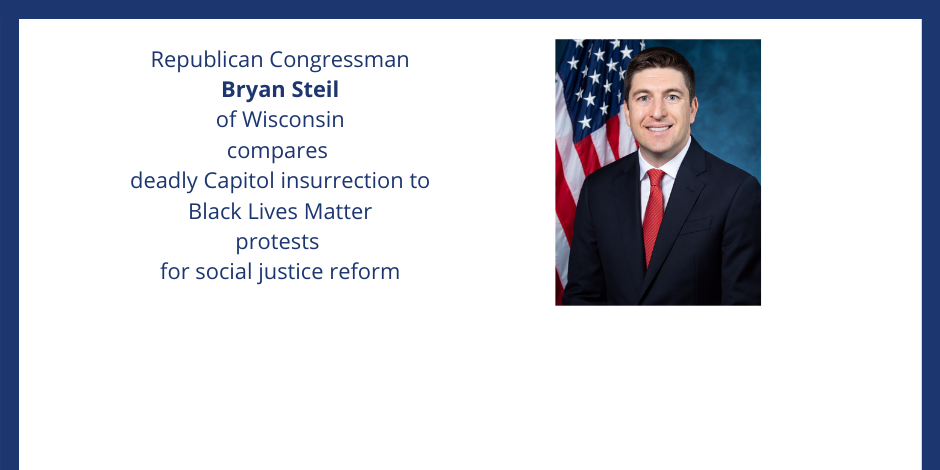 In his press release about the impending impeachment of Donald Trump, Congressman Bryan Steil compared the deadly and treasonous insurrection at our nation's Capitol building this week with Black Lives Matter marches calling for police reform in the wake of deadly police killings and shootings of Black Americans this summer.

The purpose of Steil's press release was to oppose the planned impeachment attempt of Donald Trump by Congress. Steil also voted against Trump's first impeachment. The House impeached Trump for abuse of power but Republican Senators blocked his removal from office.

The Capitol insurrection, incited by Trump and his allies just prior to the storming of the Capitol building, was fuelled by a lie about election integrity. That insurrection left 5 people dead, including a Capitol police officer, as well as 50 officers and an unknown number of civilians injured. The action by Trump's supporters put the lives of the Vice President of the United States and members of Congress at risk, and they needed to be evacuated from the Capitol.

It is the first time the Capitol has been breached and damaged by a mob of American citizens in its more than 220 year history.

Steil is comparing that conspiracy-fueled, deadly insurrection with the Black Lives Matter protests for social justice and police reform. The protests this summer came after the police killings of an unarmed George Floyd by kneeling on his neck for nine minutes, the police shooting of an unarmed Brionna Taylor in her own apartment and the police shooting of Steil's own constituent, Jacob Blake, who was shot in the back seven times in the presence of his children.

Former officer Derek Chauvin faces charges of second-degree murder, third-degree murder and second-degree manslaughter in Floyd's on May 25 death. A police officer involved in the killing of Breonna Taylor has been charged with endangerment. No charges were filed in the shooting of Jacob Blake.

If you would like to contact Rep. Steil about his comparison of a deadly and treasonous attempt to overthrow the American government with people marching for justice and police reform, you may reach him here.

You can also express your feelings about the impending impeachment attempt and his desire to keep a dangerous, conspiracy propagating, riot-inciting president in office.