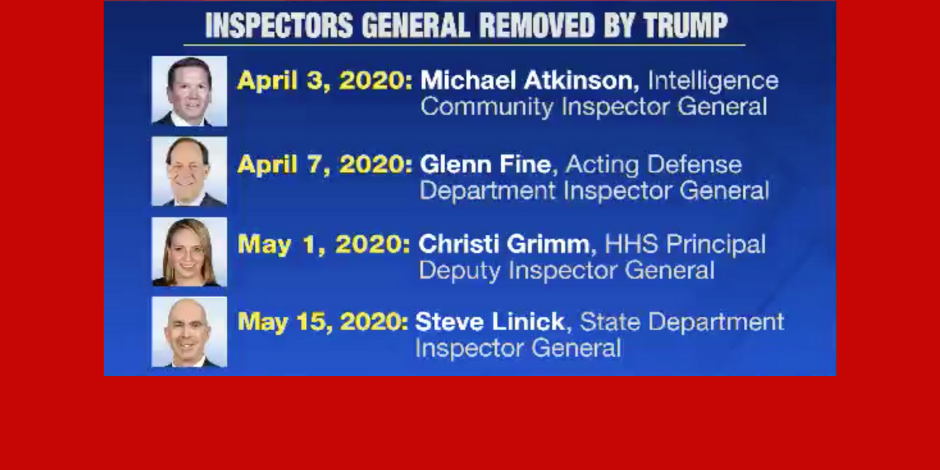 Inspectors general serve as internal government watchdogs conducting oversight of federal agencies — and although they technically are political appointees, their independence has long been protected.

Their role is to conduct investigations and audits into any potential malfeasance, fraud, waste, or abuse by the agency they oversee or its personnel, and issues reports and recommendations on its findings. An IG office is intended to operate independently.

Friday Trump accelerated his retaliatory purge of public servants by firing the State Department’s inspector general, Steve Linick, who had played a minor role in the president’s impeachment proceedings and was said to have begun investigating alleged misconduct by Secretary of State Mike Pompeo.

Trump’s move — his fourth such firing during the coronavirus pandemic alone — drew swift condemnations from Democrats and Republicans on Capitol Hill.

Acting on Pompeo’s recommendation, Trump abruptly terminated Steve A. Linick late Friday night, again challenging established norms of American governance in his push to rid the federal bureaucracy of officials he considers insufficiently loyal to or protective of him and his administration.

Sen. Mitt Romney (R-Utah) wrote Saturday evening on Twitter: “The firings of multiple Inspectors General is unprecedented; doing so without good cause chills the independence essential to their purpose. It is a threat to accountable democracy and a fissure in the constitutional balance of power.”

Sen. Charles E. Grassley (R-Iowa), a longtime champion of the independence of inspectors general from partisan interference, issued a statement Saturday, saying that “inspectors general are crucial in correcting government failures and promoting the accountability that the American people deserve.”

There are 74 inspectors general in the federal government. The concept dates back to George Washington, who named Baron Friedrich Von Steuben Inspector General of the Army. Under a 1978 law, IGs are nominated by the president and confirmed by the Senate.

Aside from these retaliatory firings, particularly troubling is the number of now vacant IG positions in the federal government.

There are currently 74 statutory federal OIGs (Office of Inspector Generals.)

Thirty-seven (37) IGs require a presidential nomination, while 37 require an appointment by the agency.

In recent weeks, Trump has ousted three other internal government watchdogs in addition to the State Dept. Inspector General.

The president fired the intelligence community’s inspector general, Michael Atkinson, who had handled the explosive whistleblower complaint that led to his impeachment.

Trump also pushed out Glenn Fine, chairman of the federal panel Congress created to oversee his administration’s management of the government’s $2 trillion coronavirus stimulus package. He replaced him with a political crony.

He also removed Christi Grimm as principal deputy inspector general for the Department of Health and Human Services, after Grimm’s office released information critical of the administration’s response to the pandemic.

In the more than two and a half years of the Trump administration, inspectors general have been busy.

Inspectors General Removed by Trump as of May 2020