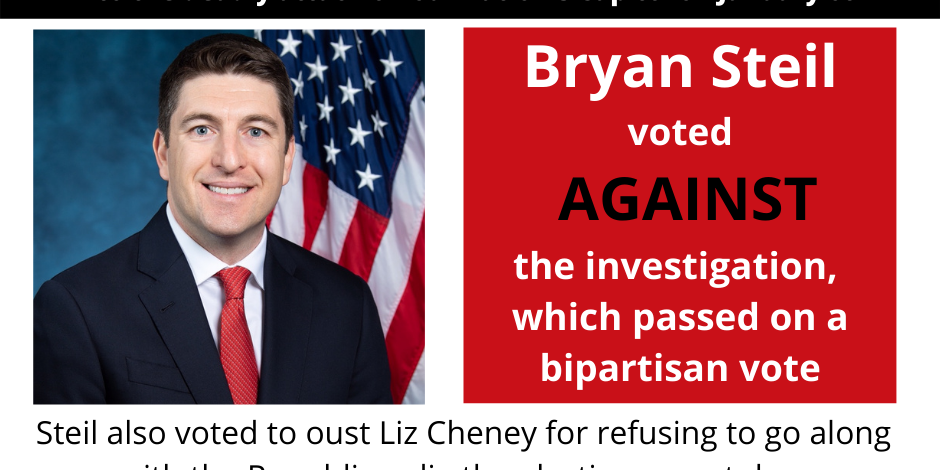 Yet Republican Rep. Bryan Steil voted AGAINST an investigation into the deadly Capitol attack that left one Capitol Police officer dead, over 140 officers injured and resulted in the suicides of two other officers within days of the insurrection.

The Capitol Police themselves have called for this investigation, yet Bryan Steil believes they don't deserve it.

He doesn't believe the American people deserve it either.

An independent commission filled with members who aren’t currently serving in government and are selected on a bipartisan basis is the most effective way to deliver a clear-eyed investigation into the attack on the Capitol that occurred January 6th. The forming of this commission passed on a bipartisan vote-with his fellow Republicans recognizing its importance.

All Democrats and 35 Republicans recognized the American people and the Capitol Police deserve an earnest and open investigation into the Capitol attack.

But not Bryan Steil.

Steil also voted to oust Republican Rep. Liz Cheney from Republican leadership when she refused to go along with Trump and Republican's lie that the election was stolen.

The right-wing American Conservative Union Foundation would approve of Steil's votes. They rated Steil the SECOND most right-wing legislator in Congress representing Wisconsin.

For 50 years now, the American Conservative Union Foundation (ACUF) — host of the Conservative Political Action Conference (CPAC) — has been ranking federal and state lawmakers according to what the right-wing group picks as the most important votes of the session.

They see Steil as their man: he has protected Trump through both impeachment trials, supported the Big Lie and voted to oust Liz Cheney for daring to tell the truth about the election.

Steil proved again today he's deserving of the right-wing's praises as he put loyalty to Trump and the Big Lie ahead of truth, facts, an obligation to the Capitol Police force and the American people.

Who’s Wisconsin’s most conservative of them all?