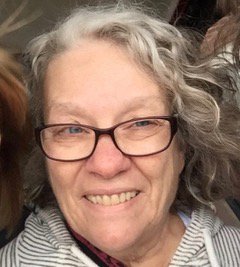 Toni was born and raised in Milwaukee.  She came to Kenosha in 1971 to finish school at what was then known as Kenosha Technical Institute.  She graduated with an Associate Degree in Court and Convention Reporting and worked as a court reporter in Kenosha County Courts until 1985.

Toni married her husband Jim, a born and raised Kenoshan, in 1978.  She continued to work as a court reporter until Jim’s job took them to Bucks County, PA where she continued as a freelance court reporter, as well as becoming active in the PTO at her daughters’ school, serving one year as president.  Jim’s job then took them to Naperville, IL.  While in Naperville she remained active in the PTO volunteering where needed, and working as a tutor in the LEAP program.  Girl Scouts also became a regular volunteer opportunity, not only as a leader but also in various positions within the service unit.  In 2011 the family moved back to Kenosha.

Toni coordinated the delivery of yard signs during the 2020 presidential election and is working as our volunteer organizer.