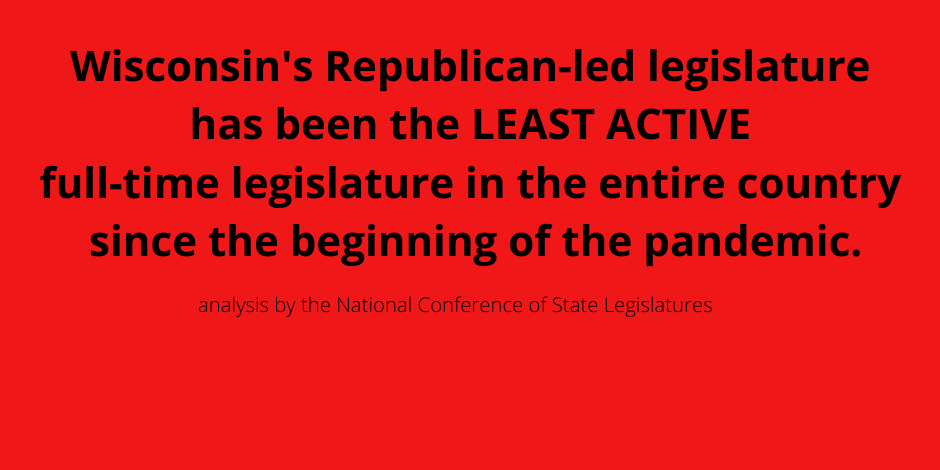 Wisconsin's Republican-led Legislature Least Active in the Nation during Pandemic

The Wisconsin Legislature has been the least active full-time state legislative body in the country since states began taking measures to combat the COVID-19 pandemic, according to the National Conference of State Legislatures.

The Republican-led legislature is being referred to by a new nickname by their Democratic members who have repeatedly urged the legislature to meet to address the pandemic: the "do nothing Legislature."

“Republicans in Wisconsin have refused to take COVID-19 seriously from the beginning and continue to be unfazed by this crisis even after more than 50 reported COVID-19 deaths in three days. Wisconsinites deserve elected officials who will put politics aside and show up to work to do the right thing, and that’s what the governor will continue to do in responding to this pandemic,” said Britt Cudaback, Gov. Evers' spokesperson.

Since Evers first declared a public health emergency due to COVID-19, a quorum of lawmakers has met on the floor just once in each chamber of the GOP-run Wisconsin Legislature. The state Assembly convened in a hybrid virtual/in-person format on April 14 to pass legislation aimed at helping Wisconsin deal with the impact of COVID-19. The Senate met almost entirely online one day later to send the package to Evers’ desk, and the guv signed it into law the same day.

By comparison, a WisPolitics.com review of legislative journals — combined with outreach to legislative clerks — found in states with full-time legislatures, the higher and lower chambers combined to convene for between nine and 58 floor sessions since March 12.

Since the Wisconsin Legislature’s last meeting in April, Evers has urged them to take action on COVID-19. Still, the only special session he’s called was to address police policies.

After Republican lawmakers sued the Evers administration over an extension of the guv’s stay-at-home order, the state Supreme Court struck down the directive and ruled it should’ve been issued as a rule to give lawmakers oversight of the process.

Lawyers representing Republican lawmakers in that suit indicated in an April legal brief the Legislature was “ready, willing, and able to work with DHS and at the same time craft legislation (which it is drafting even now) to respond to the pandemic in a comprehensive and balanced fashion and guided by federal recommendations.”

But since the court decision, no such plan materialized.

The state now ranks among the worst in the country in coronavirus cases.

Wisconsin is also experiencing record hospitalizations and single-day deaths due to the virus. Critics have argued the lack of a statewide plan, which GOP lawmakers now have the power to implement, is the driving force behind the recent COVID-19 spike.

Judge Michael Waterman, whose presiding over that case, asked Monday why Republican lawmakers have refused to act to control the pandemic.

The most recent poll released by the Marquette University Law School revealed by a 72% to 26% margin the public favored the requirement to wear masks in public places.

More than 136,000 Wisconsin residents have tested positive for the coronavirus since the pandemic began.