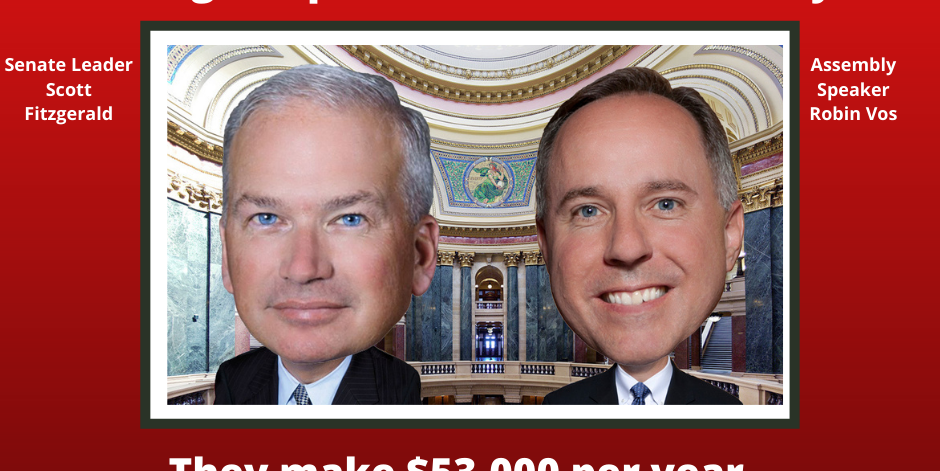 If you didn't do your job, would you still be employed?

Wisconsin's Republican-led legislators make $53,000 per year, plus pension and full benefits. They will be getting a 2% raise in January.

Yet Wisconsin has the least active full-time legislature in the nation since pandemic began, according to a review by the National Conference of State Legislatures.

Republican legislative leaders have spent more time suing Gov. Evers during the pandemic than they have spent working to pass legislation to protect Wisconsinites.

In fact, they've spent over $2 million in taxpayer dollars this year alone pursuing lawsuits against Gov. Evers, whose been working to keep us safe during the pandemic.

Gov. Evers has called 2 special legislative sessions to try to get Sen. Scott Fitzgerald and Assembly Leader Robin Vos to work with him to help the people of Wisconsin. Both times the Republicans gaveled in and then gaveled out again within seconds.

Wisconsin deserves representatives who will work together with our Governor to take care of our state during this pandemic, not waste taxpayer money obstructing any effort to help the people of our state.

Elect Joel Jacobsen for the seat currently held by Robin Vos. You can support his campaign here:

Elect Tom Palzewicz, who is running against Scott Fitzgerald for Congress. You can support his campaign here: