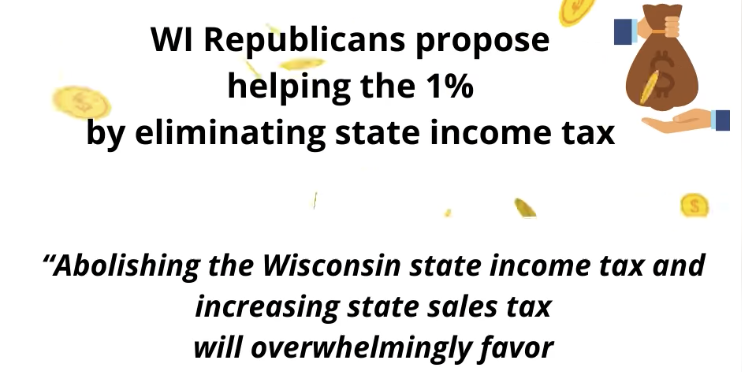 Wisconsin Republicans want the RICH to get RICHER

while the rest of us PAY THE PRICE!

Wisconsin Manufacturers and Commerce, a lobbying group for big business, is pushing a radical change to Wisconsin’s tax structure — one that would give huge tax cuts to the wealthy and powerful while shifting the responsibility of paying taxes to people with lower incomes.

WMC wants Wisconsin to increase the state sales tax to 8%, making it the highest of any state in the nation, and eliminate the state income tax, which is the state’s single biggest source of revenue.

According to Tamarine Cornelius, director of the Wisconsin Budget Project, a network of independent, nonpartisan, nonprofits, this extreme proposal would dramatically reshape who pays taxes, give huge tax cuts to the top 1%, and require people with lower incomes to make up the difference.

WMC’s election spending has helped Republicans and conservatives assume and keep control of all three branches of state government for much of the past two decades. WMC’s election spending helped elect five conservatives to the Wisconsin Supreme Court, helped former Republican Gov. Scott Walker win three elections, including a bitter recall contest in 2012, and fortified the GOP’s large majorities in the Assembly and Senate.

Contact your state legislator and tell them NO to abolishing the state income tax. You can find your legislators by entering your address here. Or by calling the legislative hotline at 1-800-362-9472.