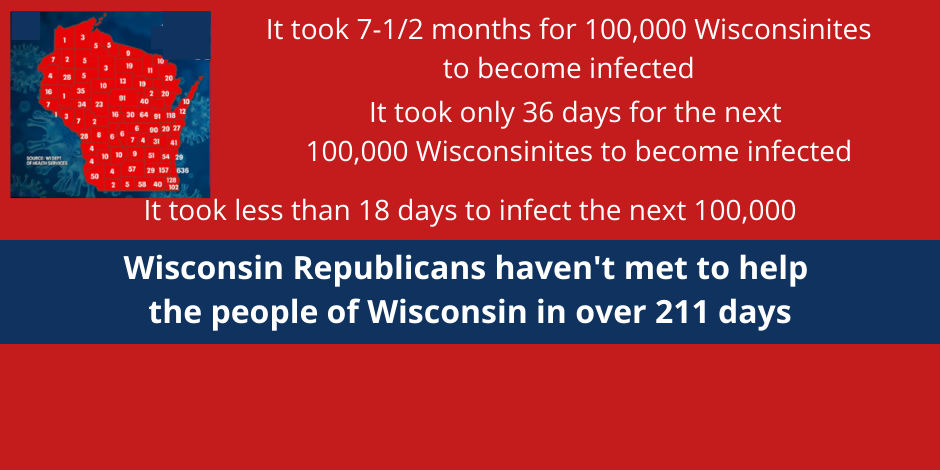 Yet have sued Gov. Evers for over $2 million using taxpayer money

As COVID-19 cases, hospitalizations and deaths surge in Wisconsin, experts see no sign of the increases slowing down unless there are some major changes.

To put that in perspective, the 300,000 total people who have tested positive for COVID-19 in Wisconsin would fill Camp Randall Stadium more than three times over. Wisconsin’s seven-day average for new COVID-19 cases has now surpassed that of New York City at the height of their deadly spring outbreak.

The Wisconsin surge is so bad that Department of Health Services this week created a new "critically high" category to mark counties that have passed a threshold of 1,000 cases per 100,000 people — a step up from the previously highest category of "very high," designated to counties that had at least 350 cases per 100,000. Sixty-five counties have been placed in the new category, while the remaining seven are at the "very high" level. Since Sept. 12, when the state began to see the effects of the fall outbreak, the daily average has risen more than fivefold. The daily average for deaths has increased by more than seven times. With the 56 reported on Thursday, deaths now average 46 a day.

Yes Wisconsin's Republican-led legislature continues to fail us. They have sued Gov. Evers, using over $2 million in taxpayer money to do so, but haven't met in over 211 days to pass any legislation or to work with the Governor on this health and financial crisis.