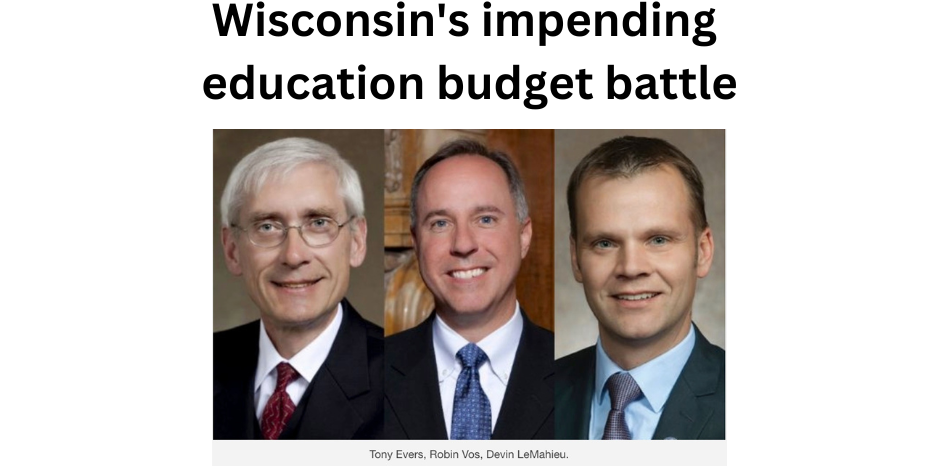 Wisconsin has an historic budget surplus: how our public schools may benefit or be harmed

Public schools vs for profit schools

Wisconsin is projected to have a $6.8 billion budget surplus in 2023.

Gov. Tony Evers supports an investment of $2 billion in state funding for K-12 public schools. Republicans do not.

Republican legislative leaders Robin Vos and Devin LeMahieu would support funding for schools only if school choice is expanded.

School choice/voucher schools are private religious schools and for-profit schools. They siphon money away from our public schools, weakening them.

Privatizing our public schools through vouchers has been a goal of conservatives for years, who believe anything is better when it is run to make a profit.

Expanding school choice/vouchers would hasten the capitalist takeover of education to enrich for-profit entities and is not in the best interest of our children or our communities.

The same tax dollars that would otherwise support a single school system get divided into multiple systems-all requiring physical buildings, staff salary and benefits, supplies etc. In privatization, you also need to add in corporate profits.

School vouchers also do not generally cover the full cost of private schools, they act as coupons to be applied toward tuition. Meaning affluent families are more likely to take advantage of them because they have the resources to make up the difference while lower income families do not.

And its not really "school choice" when private schools have the ability to pick and choose their students, frequently leaving minority students and students who are difficult to education-like those with behavioral problems or other disabilities behind. They are not required to admit all students and they are not mandated to provide the same services as public schools.

Privatization increases segregation. The entire voucher program began as a white reaction to the Supreme Court Decision in Brown vs the Board of Education. Public schools bring diverse groups of children together so they learn to better understand each other other and (ideally) learn to get along in society. Privatization continues segregation, often along religious and socioeconomic lines. Children in privatized schools tend to be homogenous.

As a result of all of this, children who may be harder to serve who have families that are less capable of advocating for them are left behind in public schools whose resources have been depleted because taxpayer money is now being divided supporting multiple school ventures, some that need to show a profit to the corporations that invested in them. Enriching private interest at the expense of the children in society who need the most help in order to succeed is not what’s in the best interest of our children or our communities.

Standardized testing once again this year showed private schools do not have children that perform any better than traditional public schools-in fact they performed worse than public schools in some areas. That means taxpayer money is being diluted on a product that does not produce particular benefits, other than to segregate some students and create religious/ corporate profits. Many private schools do not comply with state minimum standards for education.

The results of Wisconsin's 2021-2022 Forward Exams yielded the following results:

Choice schools have siphoned MILLIONS from our local public school districts and clearly aren’t the better option. Public schools are the bedrock of our communities. Expanding vouchers would not benefit children and would hurt our public schools.