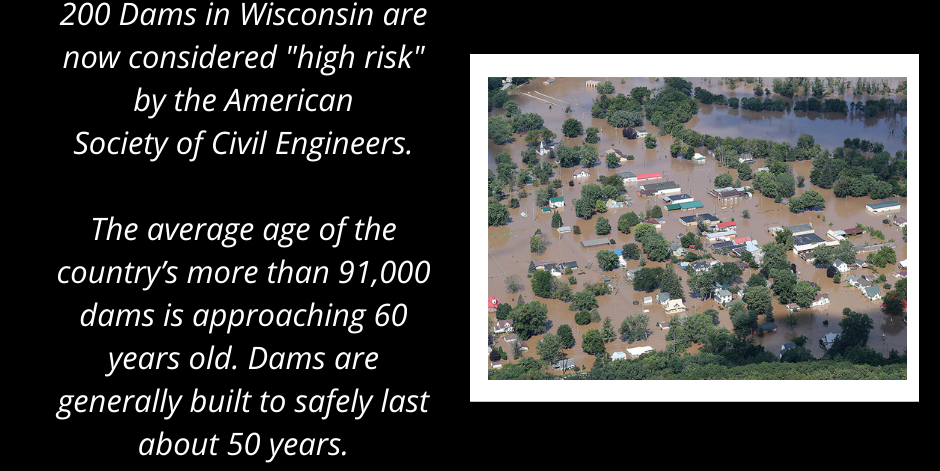 Wisconsin has a dam problem, Joe Biden wants to fix it

May 31st was Dam Awareness Day in Wisconsin.

This day was established to commemorate the 2,200 people who died in the 1889 South Fork Dam failure near Johnston, Pennsylvania. In the new era of extreme weather events, water retention dams are at high risk of failure.

The U.S. Army Corps of Engineers estimates that the average age of the country’s more than 91,000 dams is approaching 60 years old. Dams are generally built to safely last about 50 years. The inherent risks of aging infrastructure and underinvestment in maintenance, combined with climate change, greatly increase the risk of dam failures.

Wisconsin has approximately 4,7000 dams; 920 are large dams made of concrete and steel. Large dams are regulated by the state or federal regulatory authority. Small dams are inspected by their owners. Many of Wisconsin’s smaller dams are made of crushed rock, clay or soil. These are called earthen dams.

The state’s budget of $752,000, including only 11 dam inspectors, is not enough to provide adequate safety for aging dams exposed to extreme weather events.

Wisconsin has approximately 3,900 dams in the Wisconsin Department of Natural Resources (DNR) database. Nearly 200 dams are considered “high hazard” meaning loss of life would be probable should the dam fail.

From 2010 to 2020, Wisconsin has experienced 16 extreme weather events, costing the state up to $10 billion in damages.

Dams holding mine waste tailings are constructed of crushed waste rock and sandy soil. These dams are 10 times more likely to fail than dams holding water. A tragic example is the January 2019 breach of the Brazilian earthen tailings dam that killed 270 people and contaminated local water supplies. Worldwide, there have been 46 tailings dam failures in the past 20 years.

President Joe Biden is calling for $50 billion to improve the resiliency of our infrastructure and support communities’ recovery from disaster. In addition, it makes historic investment in safe drinking water, housing, broadband, caregiving, manufacturing, green energy and veteran's health.

Contact your members of Congress and tell them to vote YES on the American Jobs Plan because it's GOOD for Wisconsin!