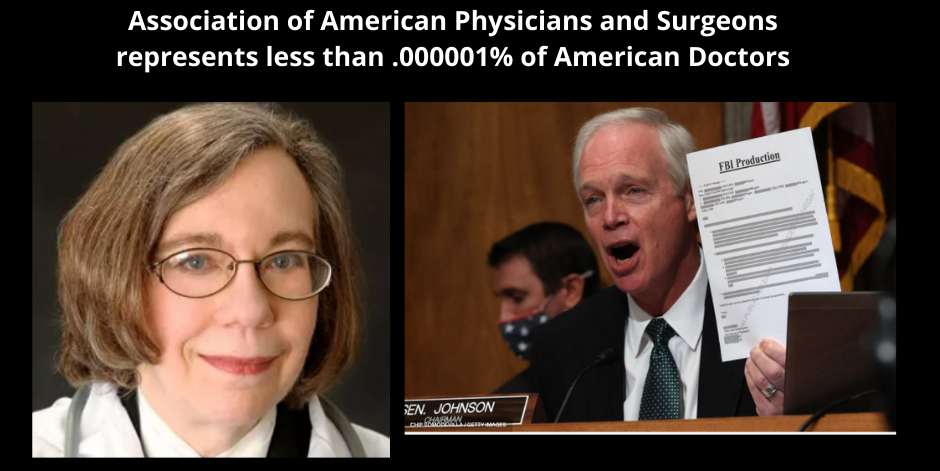 What is the Association of American Physicians and Surgeons

And more importantly, why is Ron Johnson giving this fringe group any credence during a deadly pandemic?

The Association of American Physicians and Surgeon's membership consists of less than 5000 of the country’s million or so doctors or less than .000001% of the doctors in America.

Ron Johnson's star witness, Jane M. Orient, is the head of the fringe group known as the Association of American Physicians and Surgeons. It sounds impressive.

In 2008, the AAPS suggested that President Barack Obama was covertly hypnotizing people with his speeches, and that this might explain why Jews voted for him.

AAPS’s journal, the Journal of American Physicians and Surgeons, has published articles raising doubts that HIV causes AIDS and questioning the wisdom of urging people to quit smoking.

Though AAPS often takes positions that are associated with conservative groups, it sometimes goes even further, pushing fringe views that even most mainstream conservatives do not endorse, such as the belief that mandatory vaccination is “equivalent to human experimentation” and that Medicare is “evil.”

Over the years, the group seems to have coalesced around an ethos of radical self-determination and a belief that mainstream science isn’t trustworthy. It’s the most curious of medical organizations: a doctors’ interest group that seems more invested in the interests of doctors, rather than public health...

In 2015, after measles broke out at Disneyland, AAPS put out a press release questioning the safety of vaccines. The group has suggested that women who have abortions are at a higher risk of breast cancer; this is false.

The AAPS has popped up in nearly every major health-care debate for decades, including the Affordable Care Act and opioids, and it wields a surprising amount of influence. Senator Rand Paul of Kentucky was outed as a member in 2010.

When Representative Tom Price of Georgia was nominated to lead President Donald Trump’s Department of Health and Human Services, several newspapers pointed out that he, too, was a member.

AAPS has been called the Tea Party’s favorite doctors, but it’s actually a more fitting health-care group for the Trump era. As Trump has contributed to sowing doubt about the scientific consensus, AAPS is seizing the moment.

AAPS was founded in 1943 in opposition to an early effort to provide universal health care to Americans.

On Tuesday, in the middle of a pandemic that's killing north of 2,000 Americans every day, Ron Johnson chose to invite Orient to speak to the Senate Homeland Security and Governmental Affairs Committee, of which he is the head.

"AAPS believes that liberty rights are unalienable," the statement continues. "Patients and parents have the right to refuse vaccination, although potentially contagious persons can be restricted in their movements as needed to protect others against a clear and present danger. Unvaccinated persons with no exposure to a disease and no evidence of a disease are not a clear or present danger."

This fails to take into account that a significant number of those infected are asymptomatic and therefore provide no evidence of disease, while still having the capability of infecting anyone with which they have contact.

It isn't the first time Johnson has given prominent placement to quacks and conspiracy theorists, but it may be one of the most dangerous as America faces a vaccine roll-out during a deadly pandemic that has already been rife with misinformation.

“We are facing a dangerous barrage of misinformation that ignores evidence and dismisses the scientific process, undermining our national response and belief in science,” declared a group of medical and scientific experts.

The Opposite of Socialized Medicine

Who is Dr Jane M. Orient?