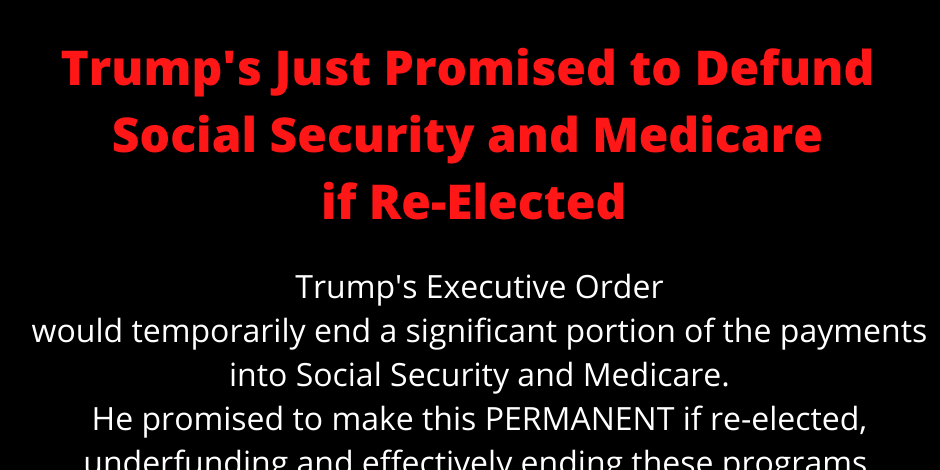 Drawing criticism from conservatives and liberals alike, Trump signed an executive order on Saturday which would stop payments into Social Security and Medicare for the largest portion of Americans.

"First (executive order) is on providing a payroll tax holiday to Americans earning less than $100,000 per year," the president said during a Saturday press briefing. "In a few moments, I will sign a directive, instructing the Treasury Department to allow employers to defer payment of the employee portion of certain payroll taxes..."

He then went even further, saying that he would make the temporary tax deferral permanent if he was re-elected in November. "So I'm going to make them all permanent," he said.

This EO makes no sense in helping people who are unemployed due to the pandemic. If you’re one of the millions of Americans who’ve lost your job because of covid-19, you’re not paying Social Security tax. Therefore, eliminating that tax doesn’t put any money in your pocket.

Social Security and Medicare are funded entirely through payroll tax contributions. Cutting out those payments for the largest portions of Americans would leave both programs significantly underfunded.

So while this move makes no sense in helping those hurt by the pandemic, it makes a lot of sense if your motive is to end these programs, which Republicans have frequently referred to as "entitlements" rather than savings accounts that millions of Americans pay into to guarantee a safe retirement and health benefits.

Democratic and Republican lawmakers had dismissed the idea of a payroll tax holiday in stimulus talks with the White House.

Workers currently pay a 6.2 percent payroll tax out of every paycheck, which would be deferred under the executive order through the end of 2020. Employers pay an additional 6.2 percent, which they would continue to pay. These taxes are used to fund Social Security and Medicare, which provide monthly income and health care for Americans when they retire.

"Just so we're all clear on this, payroll taxes fund social security and to some extent Medicare. These systems, which have helped generations retire and live, are already underfunded. Cutting the payroll tax without replacing the funding is the same as getting rid of them."

Trump has promised repeatedly not to touch Social Security, but annual budget proposals from his administration have consistently put forward suggested cuts to Social Security programs.

The president has also claimed, without evidence, that Democrats plan to cut Social Security, although there are no efforts underway to do so. To the contrary, many Democrats currently support expanding Social Security and Medicare.

Trump and his close ally, Stephen Moore, who has railed against the whole idea of Social Security for years, are now threatening to undermine the program and would essentially end it if he order holds up in court.