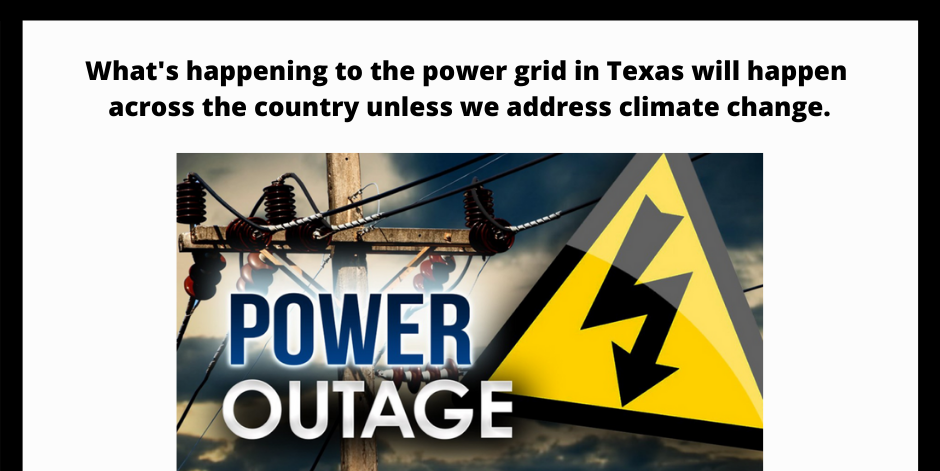 The majority of the state's power loss came from thermal sources: natural gas in particular, and was caused by an unprecedented storm caused by climate change

Despite Republican finger-pointing at frozen wind turbines, the crisis in Texas was predicted and illustrates the importance of moving our country to green energy as a way to address climate change.

The state’s large fleet of wind farms lost up to 4.5 gigawatts of capacity at times, however the capacity loss due to thermal sources was 30 gigawatts.

The crisis gripping Texas' power grid is very different from California's fiery emergencies in recent years, but there's connective tissue there: Electricity grids and infrastructure need to be better equipped for a changing climate or it will have deadly consequences.

"This crisis is illustrating the need for our energy systems to be more resilient to extreme weather," Rice University energy expert Daniel Cohan.

The collapse of Texas' power grid has long been predicted and is a result of underinvestment and neglect combined with an unprecedented storm due to climate change. Poor planning and human error played a role as well.

The Texas power grid is also not part of the U.S. power grid because they wanted to avoid Federal regulation. As a result, they are essentially a privatized island as they experience their power crisis.

Record-breaking cold weather spurred residents to crank up their electric heaters and pushed power demand beyond the worst-case scenarios that grid operators had planned for. A large fraction of the state’s gas-fired power plants were knocked offline amid icy conditions, with some plants suffering fuel shortages as natural gas demand spiked. Some of Texas’ wind turbines also froze and stopped working.

As climate change accelerates, many electric grids across the country will face extreme weather events that go far beyond the historical conditions those systems were designed for, putting them at risk of catastrophic failure.

Addressing climate change now, in part through green energy, is critical in trying to prevent these catastrophes in the future.

What went wrong with the Texas power grid?

Texas Power Plants Failed Because They Aren't Dressed For Winter

The changing climate for U.S. power