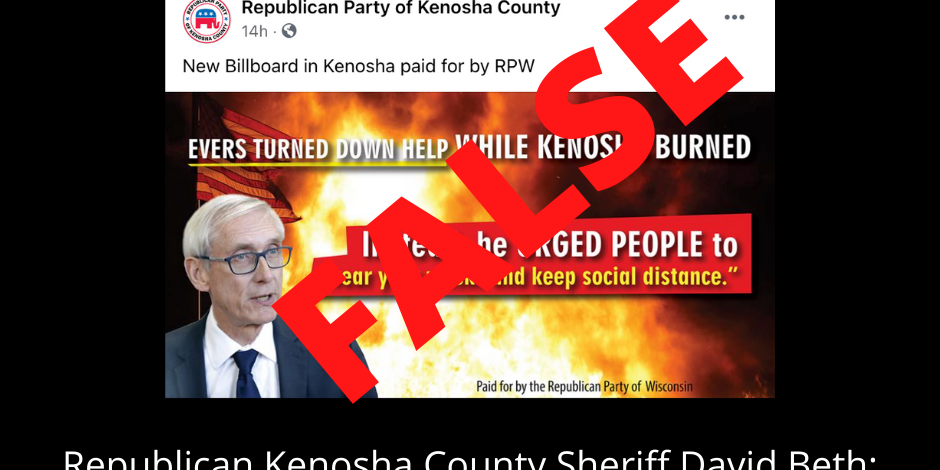 Telling a lie over and over still doesn't make it true

Sorry Republicans: we believe in FACTS

Jacob Blake was shot in the back multiple times by Kenosha police officer Rusten Sheskey. The shooting was captured on video by a bystander and shared widely on social media that evening Citizen unrest followed.

The county declared an emergency curfew starting at 10:15 p.m. City police requested the support of the Kenosha County Sheriff’s Department and the Wisconsin State Patrol, who responded to clear the scene. Most protesters dispersed after law enforcement shot rubber bullets and tear gas into the crowds.

3:00 am: Kenosha County Emergency Management alerted Mayor John Antaramian and County Executive Jim Kreuser to the unrest at approximately 3:00 am on August 24th, just hours after the shooting. They were told additional help would be necessary to quell the unrest.

Gov. Evers was contacted immediately afterward and he ordered the National Guard response to Kenosha. National Guard troops cannot be ordered unless authorized by the Governor.

The Guard’s Quick Response Force arrived in Kenosha on the 24th, less than 24 hours after the police shooting.

In Wisconsin, the reaction force rotates among National Guard units every few years with specialized training to handle urban protests.

Maj. General Knapp can only send in as many troops as are available and who have the relevant skills and training for the mission. Even though there are over 7700 National Guard troops in Wisconsin, there is only 1 battalion (equivalent to three companies) of troops who are trained for riot support. Those troops operated under the direction of local law enforcement.

Around 2 p.m. on Tuesday, Evers made his public announcement that he had authorized the Guard to support local law enforcement in Kenosha, with a focus on protecting critical infrastructure and maintaining public safety during the protests.

In addition to the National Guard, state troopers, DNR agents, and other local law enforcement agencies in Wisconsin passed along resources and personnel, some sending up to one third of their personnel.

Fires and clashes with law enforcement continued late into the night after the city’s 8 pm curfew, leaving extensive damage to the city.

After being informed by Maj. General Knapp of the need for additional help, Gov. Evers requested troops from neighboring states. His request was granted. He also issued a public statement denouncing the “damage and destruction. “There remains a line between peaceful assembly and what we saw last night that put individuals, families, and businesses in danger,”

Gov. Evers also cited the ongoing protests in Portland for declining Homeland Security troops. These agents were filmed in unmarked uniforms grabbing citizens off the street and putting them into unmarked vans. Their presence and actions were cited as one of the reasons the protests in Portland escalated. When questioned about turning down Homeland Security during a Milwaukee Press Club discussion on September 9th, Evers responded “we saw how poorly that played out in Portland.”

None of the National Guard troops in Wisconsin were federalized, meaning under control of the federal government. They all were under the control of Maj. General Knapp for the duration of their stay.

Donald Trump posted on Twitter on the night of August 25th that Gov. Evers should call in the National Guard.

White House Chief of Staff Mark Meadows also appeared on Fox News that night and said Evers had turned down an offer from the federal government for support, although Evers had accepted all support except Homeland Security for the above mentioned reasons.

Adj. Major Knapp responded to these false statements: “I don’t worry about the president’s tweets.”

By Wednesday, most of the violence was over. The National Guard presence continued to expand in Kenosha.

Close to 2,000 National Guard troops were in Kenosha by the end of the week at the request of Maj. General Knapp.

Arizona, Michigan, and Alabama agreed to send soldiers and resources to Kenosha through the Emergency Management Assistance Compact — a mutual agreement that allows states to send each other aid in times of emergency. Adj. Major Knapp stated the out-of-state Guard members would be “active state duty,” meaning directed by Wisconsin leadership and not federal orders.

The National Guard withdrew from Kenosha.

“The state has been fantastic as far as sending resources, from the very first minute that we asked them. They have sent everything that we’ve asked for.”

“Do we all wish this would have all gone faster, that thousands of troops could have arrived immediately to prevent the fatalities, injuries and damage to property caused by the rioting? Of course. But you can’t push an “easy” button and have the National Guard float down from the sky. That’s not how it works. In fact, the system worked exactly how it’s designed to function, and Evers answered every call and did everything he could within his powers to assist Kenosha County in its time of greatest need.”

Just because Republicans repeat the lie over and over that "Gov. Evers let Kenosha burn" doesn't make it true.

Gov. Says National Guard Troops Will Be In Kenosha Tonight