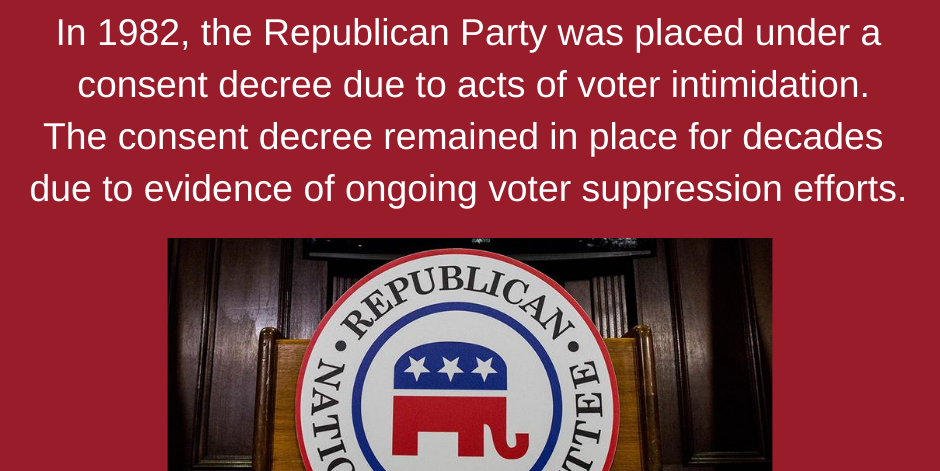 The Republican Party has a long and well-documented history of voter suppression.

Donald Trump's threat to summon law enforcement officials to guard polling places recently echoed the same reasons that the Republican Party found itself under a multi-year consent decree beginning in 1982.

The Republican Party agreed to the consent decree rather than going to trial for engaging in multiple acts of voter suppression and violating the Civil Right Acts.

At the core of the lawsuit was the fact that, among other actions, the Republican Party dispatched off-duty police officers to patrol polling places in predominantly African-American and Latino neighborhoods.

Even though the RNC refused to admit wrong-doing in the case, they did not want it heard at trial, so instead entered into the consent decree and agreed to stop harassing and intimidating voters of color, by sending off-duty deputy sheriffs and local police officers who wore armbands and patrolled the polls in largely Black and Latino neighborhoods. Some displayed their firearms. Official-looking signs were posted at some precincts warning that voter fraud is a crime and that the task force was watching..

Over the next three decades, enough evidence of ongoing Republican voter suppression was presented to continue the consent decree until 2018, when a federal judge lifted the order.

The 2020 presidential election will be the first in nearly 40 years when the RNC isn’t bound by the terms of that 1982 decree.

In an interview Thursday with Fox News host Sean Hannity, Trump described law enforcement officers as part of a phalanx of authorities he hopes will monitor voting in November.

Trump’s remarks are part of a pattern of comments in which he has suggested he is willing to take actions to impede how people cast their ballots this fall. He has repeatedly sought to undermine confidence in the November vote, making false claims about the integrity of mail-in balloting and raising the specter of widespread electoral fraud.

Earlier this month, he floated the idea of withholding election money from states and refusing funding for the U.S. Postal Service so as to curtail the use of voting by mail, which he believes may harm his chance at re-election.

Justin Clark, a senior lawyer on the Trump 2020 campaign, met with a group of Republican lawyers in Madison WI last November. He told them “Traditionally, it’s always been Republicans suppressing votes in places.” He went on to describe the RNC's plans to stamp our "voter fraud" in 2020: “It’s going to be a much bigger program, much more aggressive program, a better funded program.”

Clark, the Trump campaign lawyer, told the group of Republicans at that private Madison meeting that the end of the consent decree was “a huge, huge, huge, huge deal,” freeing the RNC to directly coordinate with campaigns and political committees on so-called "Election Day operations."

The president has limited authority to order law enforcement to patrol polling places. Sheriff’s deputies and police officers are commanded at the local level, and a federal law bars U.S. government officials from sending “armed men” to the vicinity of polling places.

But civil rights advocates said they feared Trump’s words could inspire local officials to act on his behalf. And they said even the threat of encountering police officers at the polls could be frightening to some voters, particularly in communities of color where residents are distrustful of the police.

“This is just such an old, dirty voter suppression tactic,” said Kristen Clarke, who leads the Lawyers’ Committee for Civil Rights Under Law. “There is no doubt that this is about instilling fear and depressing participation in communities of color.”

The Voting Rights Act outlaws the intimidation or coercion of voters, a provision adopted to combat long-standing tactics that were used in the Jim Crow South to prevent Black people from participating in elections. The tactics included deploying sheriff’s deputies and police officers to the polls.

Earlier this year, a conservative organization called True the Vote was recruiting former members of the military to go to polling places, according to Ed Hiner, a retired Navy SEAL who said he started the group’s “Continue to Serve” program.

Hiner said in an interview that he used the email lists from veterans associations to invite 2 million former military personnel to participate.

True the Vote alleges on its website that “radicalized leftist organizations are hard at work exploiting the weaknesses of our elector process.” Hiner has since left the organization after realizing how politicized it had become.

Federal law does not allow federal officials to station “armed men” in the vicinity of polling places, the Justice Department has determined that this means a U.S. attorney cannot order FBI agents or U.S. marshals to the polls.

The Justice Department does, however, deploy unarmed, specially trained observers and poll monitors — though the number of those people has declined because of a 2013 Supreme Court decision limiting the federal government’s role inside polling places on Election Day.

For voting assistance in Wisconsin, call the Voter Assistance Hotline.

The GOP Plot Against America To Suppress The Vote

Armed Men At The Polls