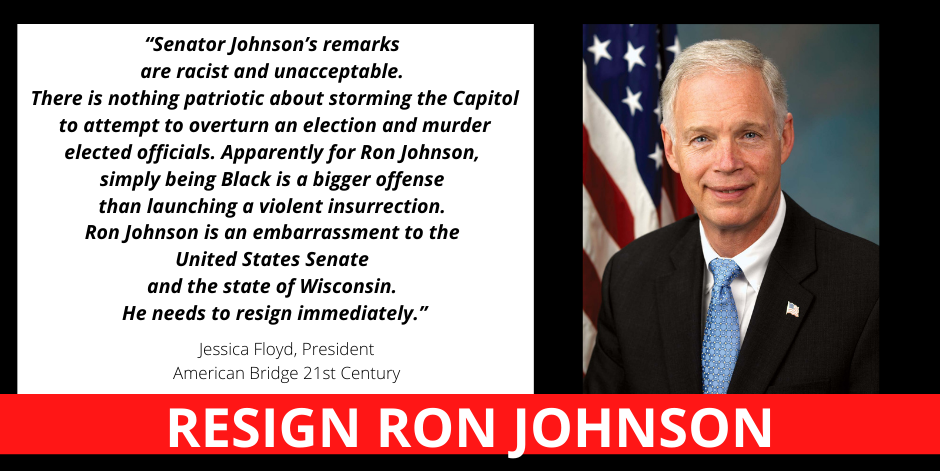 He is not fit to represent our great and diverse state

Senator Ron Johnson promoted an election lie that helped fuel the deadly Capitol insurrection which left one Capitol Police Officer dead, 140 wounded and contributed to the suicides of two other officers. Four other people died.

Johnson planned to vote against the certification of the election until the insurrection he fueled. He intended to nullify the legally cast votes of millions of Americans, including those in Wisconsin.

Johnson dismissed the actions of the violent, murderous mob who attacked the Capitol on January 6th, saying Trump supporters love law enforcement and that "This didn't seem like an armed insurrection to me" despite numerous deaths and injuries. He went on to say "antifa" was behind the attack, despite arrest records and law enforcement officials testimony that it was Trump supporters alone who attacked the Capitol.

This week Johnson said the violent mob "love this country, they truly respect law enforcement, would never do anything to break the law, and so I wasn't concerned.” He went on to say had the mob been Black, been supporters of BLM or antifa, he would have been concerned.

“Senator Johnson’s remarks are racist and unacceptable. There is nothing patriotic about storming the Capitol to attempt to overturn an election and murder elected officials. Apparently for Ron Johnson, simply being Black is a bigger offense than launching a violent insurrection. Ron Johnson is an embarrassment to the United States Senate and the state of Wisconsin. He needs to resign immediately,” said Jessica Floyd, American Bridge 21st Century President.

Wisconsin cannot be represented by a Senator who attempts to overthrow our democratic election, who espouses racist views, and who refuses to acknowledge the danger of violent white supremacists, which Intelligence agencies tell us are the greatest threat of domestic terrorism. Our great and diverse state cannot be represented by someone who defends white domestic terrorists but who fears Black citizens.

Call or email Ron Johnson's office and tell him to resign.