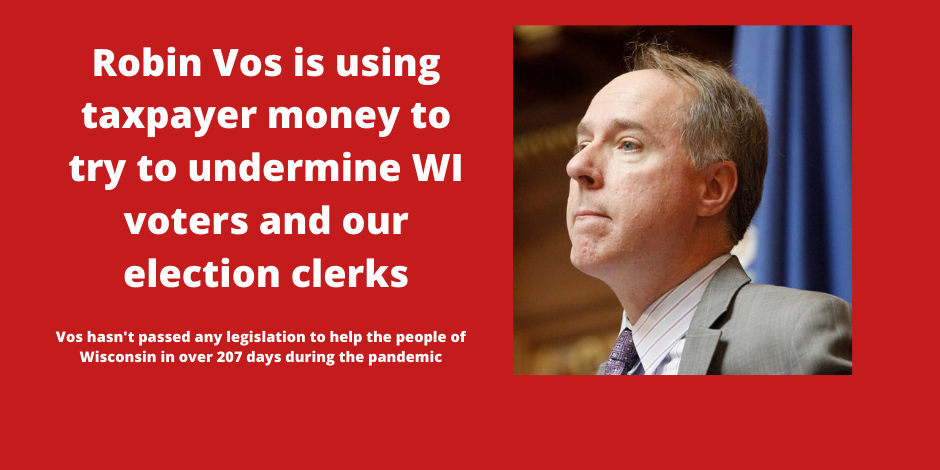 Even his own party members and GOP election experts disagree with this investigation.

Rather than passing legislation to help Wisconsinites during a pandemic, or using his power to investigate alleged attempted vote fraud across state lines initiated by Kenosha for Trump, a group which shares the office of the Republican Party of Kenosha County, Assembly Speaker Robin Vos instead is choosing to investigate the not-unexpected impact of Milwaukee absentee ballots on the Wisconsin presidential election.

Even his Republican colleagues and Republican number crunchers in the state are telling Vos he's wasting his time and taxpayer money: there were no election irregularities.

Assembly Majority Leader Jim Steineke (R-Kaukauna) posted on Facebook: "Please read this. The absentee ballots in MKE that were reported in the early morning hours were NOT a surprise. We knew exactly how many were out there the entire day. Them being reported late is NOT an indication of fraud."

One of the best Republican number crunchers, Joe Handrick, actually works for Vos in Madison. Handrick’s knowledge of elections is so respected, just about every media figure covering politics in the state follows the Wisconsin GOP’s election expert on Twitter.

Handrick actually predicted on Election Night what would happen and the impact of the remaining outstanding absentee ballots on Donald Trump's early lead:

Based on these numbers-

Probably not enough GOP areas left to make that up.

According to Vos, 'mail-in ballot dumps and voter fraud' are behind his decision, despite his saying 'Wisconsin‘s election system is one of the best in the country. We have well-trained staff that finished counting the ballots well before most other states.'
Vos has previously spoken dismissively about Wisconsin’s most populous cities; having said after the 2018 gubernatorial election, ‘if you took Madison and Milwaukee out of the state election formula, we would have a clear majority’.

The Democratic members of the Assembly Committee on Campaigns and Elections responded to Vos' investigation:

“This is a ridiculous attempt to cast doubt on the results of the November 2020 Presidential Election in Wisconsin, and we reject it outright. It is irresponsible, unnecessary, and unfounded. While members of President Trump’s campaign actively engage in attempts to undermine state elections elsewhere, the Speaker is joining his party’s desperate attempts to deny the will of the people by manufacturing controversy here in Wisconsin.

“Clerks across the state are finalizing election results as we speak, in full compliance with state and federal law. They have risen to the monumental task of administering this election amid a new spike in COVID- 19 cases and ever-heightened scrutiny of their work.

After sitting on his hands for over six months doing nothing to address the pandemic or its impact on families and small businesses, the Speaker has decided instead to play political games and complain when the results of a statewide election did not go his way.

“As members of the Speaker’s own party have pointed out, recounts in Wisconsin have shown time and time again that our electoral system is reliable and secure. The Wisconsin Elections Commission has reported no irregularities with regard to the administration of this election. There is no reason to doubt the results provided by our hard-working clerks. We are grateful for all the poll workers and National Guard members who worked tirelessly to ensure that every voter was able to make their voice heard.”

Robin Vos, the state has many needs during this pandemic-unemployment is high-people are in need of genuine help to stay in their apartments and homes, to feed their families, to pay their bills.

Our election clerks have done their jobs admirably under extremely difficult conditions. The people of Wisconsin have spoken.

Days after the election, Wisconsin Republicans urged volunteers to call Pennsylvania Trump supporters and ask them to return ballots

WHAT ROBIN VOS WILL FIND

Fact check: Wisconsin legislators have gone about 6 months without passing a bill