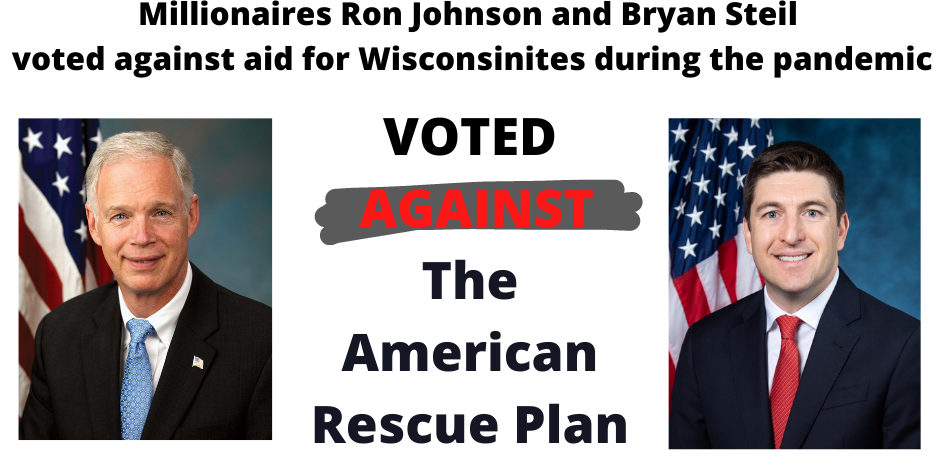 The American Rescue plan provides $20 billion in relief to Wisconsinites

The American Rescue plan provides $20 billion in relief to Wisconsinites – money that will go to families, small businesses, re-opening schools and help cities across the state.

Total: The American Rescue plan would provide $20 billion in relief to Wisconsinites – money that would go to families, small businesses, and cities across the state.

Direct Relief. A provision that would send $1,400 checks to American families who need it most would give $7.8 billion to Wisconsin families, helping 4 million adults and 1.5 million children in the state.

Earned Income Tax Credit. 349,000 Wisconsinites claimed the EITC in 2020. However, workers without children were only able to claim a maximum of $529 dollars. The American Rescue Plan raises this maximum amount to $1,500. Approximately 214,000 childless workers in Wisconsin would gain $214 million from the expanded EITC benefit.

Food Assistance. The American Rescue Plan would extend the 15 percent increase in SNAP benefits passed in December through at least September. Families would receive an additional $27 per person per month, and in Wisconsin, 30 percent of that increase would go to the neediest households – those with income below 50 percent of the federal poverty level. As of mid-December 2020, there were 723,000 people receiving SNAP benefits. That would bring an additional $20 million into the state and help ease the food insecurity in Wisconsin.

Despite all Republicans voting to pass the 2017 Tax Cuts and Jobs Act, the $1.9 trillion bill that benefitted the wealthy and corporations, not a single Republican supported aid to the American people during the dual health and economic crisis caused by the coronavirus. This aid came from Democrats alone.

Congressman Bryan Steil and Senator Ron Johnson prove once again, they'll vote to support the wealthy (themselves) but not everyday working class Wisconsinites who need help during a crisis.

American Rescue Plan: What's In It For Wisconsin

Who Benefitted from the Tax Cuts and Jobs Act