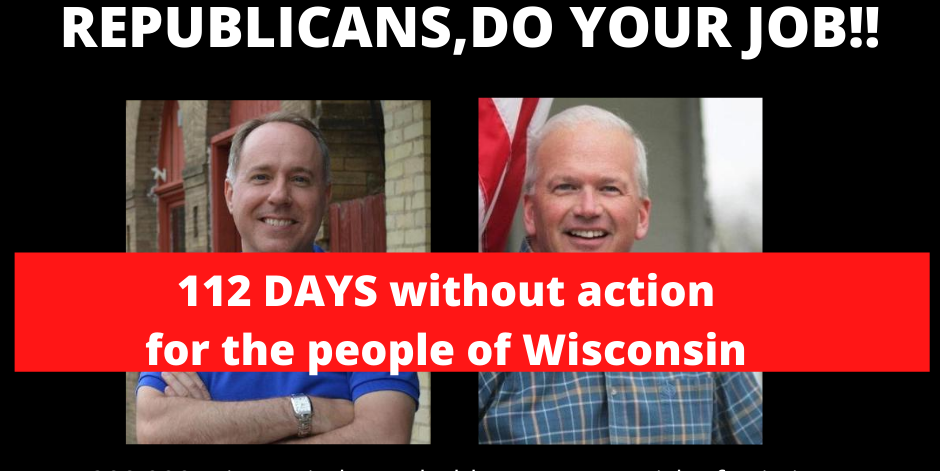 Republicans, Do Your Job!!

Months Without Action To Help The People Of Wisconsin

Wisconsin's Republican-led legislature has not met to help the people of Wisconsin deal with the many impacts of the pandemic in over 112 days.

Only Republican Senate leader Scott Fitzgerald and Republican Assembly leader Robin Vos have the power to reconvene the legislature.

Renters facing eviction are a growing cross-section of Wisconsinites whose struggles threaten to implode the state economy. About 115,000 households in the state are behind on rent or have deferred payments, and about 150,000 have no or “slight” confidence in their ability to make rent next month.

Statewide, about 200,000 Wisconsin households are at risk of eviction.

The $600 federal weekly unemployment payments have expired, leaving many families unable to pay their bills.

The state is struggling with a crippling backlog in unemployment payments due to a decades-outdated unemployment system which former Gov. Scott Walker and Republicans were warned about during audits in 2007 and again in 2014. They chose to ignore the problem and not invest in the necessary upgrades to deal with a crisis.

But Vos and Fitzgerald are finally considering action.

Is it to help struggling Wisconsinites with money to pay rent or their bills?

Is it to help uninsured Wisconsinites who lost their health insurance when they lost their jobs?

Is it to deal with the antiquated unemployment system they failed to address for years?

Is it to increase contract tracing and testing to control the spread of the pandemic in Wisconsin, which is now considered a virus hotspot?

They are considering suing Gov. Evers to end a mandate to wear masks in public spaces.

Wisconsin Families At Risk Of Eviction