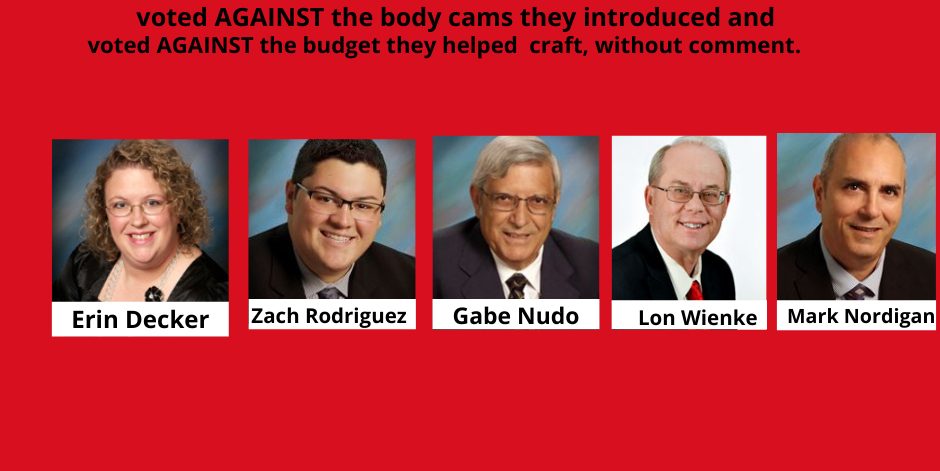 Republican Supervisors vote against their own proposal and budget

They fail to represent the citizens who elected them

“Myself and the co-sponsors believe that, with the death of George Floyd and the protests that followed and are still happening, it is time for action. For far too long politicians have only given lip service on this issue, it is time for the Kenosha County Board to take action to be part of the solution.”

This statement was made by Republican County Board Supervisor Erin Decker, chair of the Republican Party of Kenosha County, in June about approving body cameras for the Kenosha County Sheriff's Dept.

At Thursday night's board meeting Decker, and fellow Republicans board members Gabe Nudo, Mark Nordigian, and Lon Wienke voted no against those same body cameras and the bonding issues in the budget, without a single comment. Supervisor Zach Rodriguez abstained, also a no vote. Republican Supervisor Amy Maurer was absent.

Supervisor Jeff Gentz said not passing the bonding would stop “all the spending for all the capital projects in our county” and called out Nudo for his refusal to vote in favor of funding them.

“So, this is going to eliminate buying the body cameras and everything else you want to do and needs to be done in this county for this stupid stunt,” Gentz said. “I just want everybody to know that.”

Voting against were supervisors

The body cameras passed with unanimous board support in July when introduced by Decker, but these supervisors then killed their purchase and refused to even explain why.

Kenosha County Executive Jim Kreuser said these same supervisors participated in the process of working on the county budget items during their committees and all steps leading up to Thursday's vote and not a single one recommended any changes before voting no at Thursday night's meeting without comment.

Kreuser said this was a failure to represent the citizens who elected them.

“Supervisor Zach Rodriguez participated in the process. He voted for all of the projects at the Public Works meeting. He was at the Finance Committee hearings, and yet he never made suggestions for changes, or voiced concerns about the projects or said that he did not support the bonding. He has claimed he was for body cameras. He said he was pleased the Sheriff’s Department could start the process to purchase those body cameras in December.

Rodriguez voted for the budget Thursday night, but he voted against it when he abstained without comment on the bonding. Abstention is a no. The citizens of Kenosha County know that Zach Rodriguez is now on record against body cameras. It’s an abdication of duty to the citizens who elected him.

“Supervisor Gabe Nudo talked on the board floor about not liking me, and that’s OK. He doesn’t have to like me, but that’s not a reason to vote against projects for the benefit of the citizens of Kenosha County. That is not what a public servant should be doing."

“Supervisor Nudo also voted for the highway projects in committee, and then against them Thursday night.'

“Supervisor Lon Wienke promised veterans that he would support the Kenosha County Veterans Memorial Park project, and then voted against it on Thursday night.