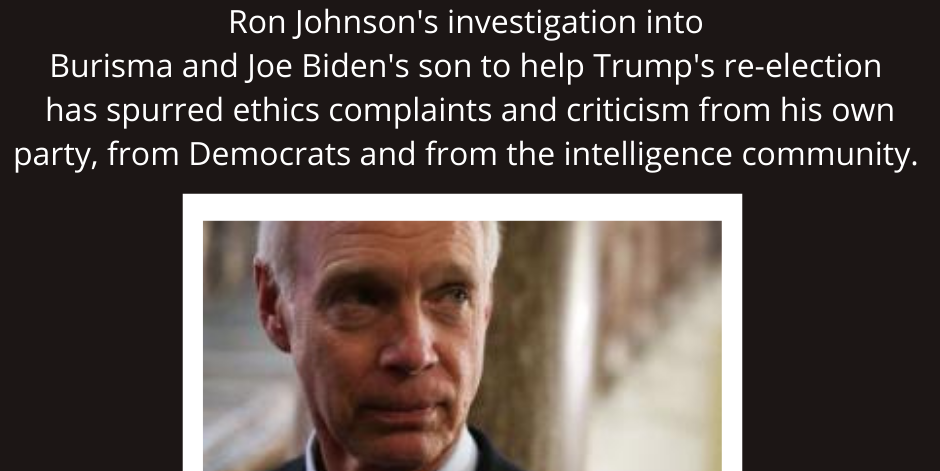 Ethic complaints have been filed against Senator Ron Johnson for abuse of his office and the intelligence community has identified his sources as Russian disinformation efforts.

And now his own Republican colleague agrees Johnson's motivations are political - a desire to help President Trump get re-elected.

Nonprofit ethics watchdogs American Oversight and the Center for Media and Democracy today submitted a complaint to the Senate Select Committee on Ethics calling for an investigation into Sen. Ron Johnson’s abuse of his official position as chair of the Senate Homeland Security and Governmental Affairs Committee (HSGAC) to advance discredited political attacks against former Vice President Joseph Biden.

“Our complaint makes a clear and compelling case that Senator Johnson violated the Senate Ethics Code,” said Arn Pearson, executive director at the Center for Media and Democracy. “If Johnson’s ‘investigation’ in coordination with state actors is allowed to move forward without consequence, it will set a dangerous precedent and further destabilize the foundation of our democracy.”

The complaint outlines how Johnson’s investigation into matters relating to Biden violates Senate rules and represents both an abuse of his position and misuse of official resources to promote debunked, political claims about the presumptive Democratic nominee and launder possible disinformation from foreign state actors.

Fellow Republican Senators — including the previous and current Chairs of the Senate Intelligence Committee Sens. Richard Burr and Marco Rubio — have warned Senators Johnson and Chuck Grassley that their Ukraine investigations could aid the Kremlin. But they have been reluctant to stop him.

Allegations concerning Biden’s role in conducting U.S. policy towards Ukraine were raised during the impeachment proceedings against President Donald Trump as it was already anticipated Biden would declare a run for the presidency and was expected to be the strongest candidate Donald Trump would face.

Johnson's allegations that are fueling his inquiry have already been discredited by the intelligence community and knowledgeable witnesses. Johnson himself in 2016 supported the very conduct that is alleged to have been corrupt, namely the conditioning of international aid on the dismissal of a corrupt Ukrainian prosecutor.

Even more concerning, Johnson appears to be using information provided or made publicly available by foreign individuals with known ties to Russia who have openly declared their intent to aid Trump’s reelection effort. The complaint submitted by American Oversight and the Center for Media and Democracy cites multiple examples of actions taken by Johnson that referenced information released or shared by these individuals, including Andriy Derkach, a graduate of the KGB academy who was described in an Aug. 7 statement from the Office of the Director of National Intelligence as “spreading claims about corruption … to undermine former Vice President Biden’s candidacy.”

Federal law prohibits foreign nationals from financing activities to influence U.S. elections. To the extent that Johnson’s investigation is serving to launder misinformation provided by Derkach and other foreign actors, it would violate multiple Senate rules and standards.

Johnson released an 11-page “open letter” Monday defending his ongoing investigations after complaints from his colleagues, from Democrats and from the intelligence community. Johnson is claiming that Democrats and the media are attacking his committee's work out of an “almost maniacal devotion to ending the Trump presidency.”

However, criticism and concerns over his investigation are also coming from members of his own party as well as the intelligence community.

Of particular concern is the fact that Johnson has been devoted to President Trump and been clear his investigation will help with Trump's re-election.

"I would think it would certainly help Donald Trump win reelection and certainly be pretty good, I would say, evidence about not voting for Vice President Biden," Johnson has said.

Johnson, chairman of the Senate Committee on Homeland Security & Governmental Affairs, is running investigations over how special counsel Robert Mueller's investigation began as well as how Joe Biden, as vice president, purportedly favored Ukraine in U.S. policy because his son Hunter sat on the board of a Ukrainian energy company.

"Ron Johnson just explicitly admitted that he is diverting the resources of the Senate Homeland Security and Governmental Affairs Committee away from oversight of the failing coronavirus response so that he can instead weaponize taxpayer money to, in his own words, 'help Donald Trump win re-election.' "

According to experts, there are three channels of Russian disinformation that have been influencing Sen. Johnson’s Ukraine-related investigations.

Channel 2. Russian-linked Ukrainian operatives spreading disinformation via media outlets, which have been picked up and expressly relied upon by Sen. Johnson.

Part of the Kremlin’s effort is to drive a wedge between Ukraine and the United States, part is to sow political discord inside the United States, and another part is, as now confirmed publicly by the US intelligence community, to support Trump’s re-election bid.

Johnson is enabling all three. And while his Republican colleagues say his motivations are clear, there has been no effort to stop him.

WATCHDOGS CALL FOR INVESTIGATION OF SEN. RON JOHNSON’S ABUSE OF HIS OFFICE FOR POLITICAL ENDS

How Sen. Ron Johnson’s Investigation Became an Enabler of Russian Disinformation: Part I