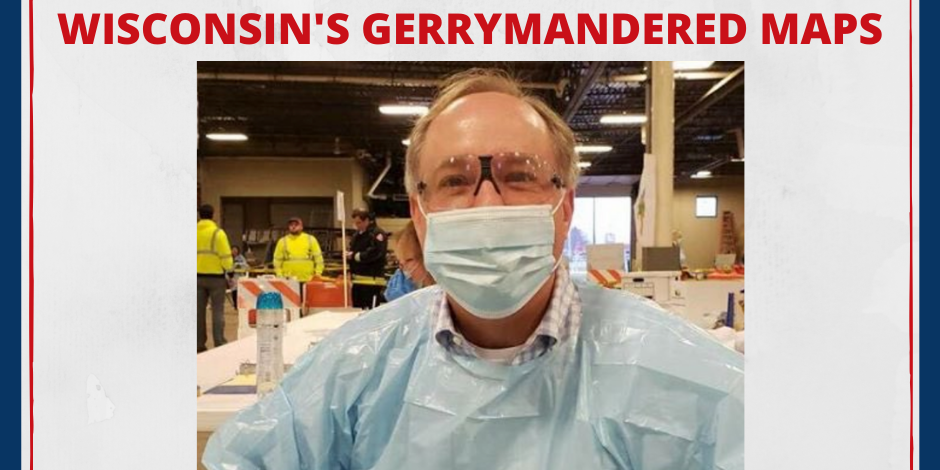 Like Mitch McConnell in the Senate, Robin Vos single-handedly determines what bills come to the floor for discussion and what bills die without a hearing.

Yet none of this legislation has ever even made it to the Assembly floor for discussion.

As Assembly leader, he determines which bill reach the floor for discussion and which never see the light of day.

Robin Vos has killed any attempt to even discuss these items which are popular with Wisconsin voters.

HOW DOES HE GET AWAY WITH IT?

In Wisconsin, the drawing of congressional and legislative districts is handled by state legislatures the year after each census and those maps remain in place for 10 years. That creates a strong incentive for partisan lawmakers to draw districts in a way that benefits their own party.

Robin Vos' ability to ignore the will of voters throughout Wisconsin is a direct result of gerrymandering. Vos' district was drawn in such a way that it is filled with strong conservative Republican voters who re-elect him term after term. And Vos himself chose which voters would make up his district.

Following the 2010 election, with Republicans in control of both houses of the legislature and Republican Scott Walker as Governor, maps were drawn in secret by a handful of Republicans led by Robin Vos and a team of computer experts.

These computer experts repeatedly redrew test maps until they found district boundaries that would assure the election of Republican legislators. They redrew the maps to the advantage of known strong Republican voters in the majority of voting districts-and packing known strong Democratic voters into a minority of districts.

Maps drawn by partisan legislators due have the expectation of benefitting the party which draws them over the other. In most states, that benefit translates to a 3% advantage. In Wisconsin, it resulted in a 17% advantage for Republicans.

This resulted in lawsuits up to the Supreme Court. The Court recognized the extreme gerrymandering of Wisconsin's maps, but sent it back to the state to address rather than intervening. Which is ironic, because it again puts it back into the hands of Robin Vos as to whether Wisconsin will have non-partisan maps when they are redrawn next year following the census.

To date, 51 of 72 counties in Wisconsin have by now supported nonpartisan redistricting, either through a referendum, a county board resolution or both.

In the most recent Marquette University Law School poll, 72% of respondents, including majorities of Democratic, Republican and independent voters, favored a nonpartisan process for redrawing voting maps.

There has been widespread concern that the Republican-dominated Legislature would try to exclude Governor Tony Evers from a say in redistricting the state following the 2020 census. GOP legislators would do this by passing revised districts in a joint resolution from the state Assembly and Senate rather than a bill. Unlike a bill, a joint resolution cannot be vetoed by the governor.

Republican Assembly leader Robin Vos, one of the architects behind Wisconsin's currently gerrymandered maps, has rejected Governor Evers’ plan to establish a nonpartisan commission to recommend new legislative districts: “This is just Democrats rallying their base. This is not something that actually has a huge appeal to anybody outside of the Democrat activists.”

Despite the negative public reaction to the 2011 gerrymander, Vos seems intent on following the same basic strategy next year. He said he may have members sign secrecy pledges again.

Vos’ has attempted to blame bad Democratic candidates. This ruse, however, is not supported by actual election results.

In the 2018 election, Democrat Tony Evers won the election with 50.6 percent of the two-party vote, versus 49.4 percent for Scott Walker, yet Evers won just 36 percent of Wisconsin’s 99 Assembly districts, compared to 63 percent for Walker.

The results show that gerrymandering created a majority of districts that are strongly Republican, which makes it easy for most GOP legislative candidates to win. It also makes it easy for them to ignore the majority opinion of voters since they know their seats are safe.

Fair voting maps mean legislators are answerable to their constituents-all of them. It means they must learn to compromise, to work with others, to find mutually acceptable solutions to the state's problems. It reduces partisanship and puts the voters back in control of decisions made by our government.

Kenosha voters will have their chance to weigh in on non-partisan redistricting at the ballot box in November with our own referendum. A Fair Maps resolution was passed by the Kenosha County Board in 2017.