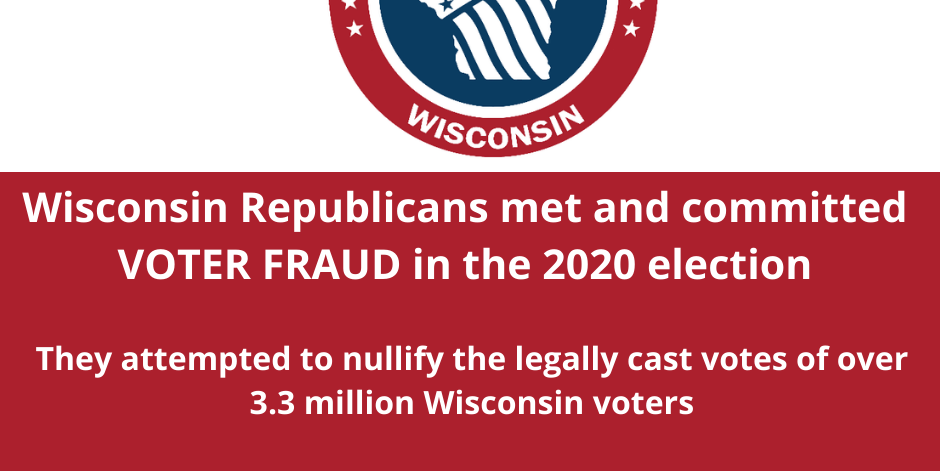 In Wisconsin, voters decide our elections.

However, when the Electoral College met in our state after the 2020 election, 10 Republican Wisconsinites chose to commit fraud.

While the electors chosen by Wisconsin voters met in public and cast Wisconsin’s votes in accordance with the election results, these 10 Republicans skulked in the shadows and met in secrecy.

These 10 Wisconsinites — including then-Chair of the state Republican Party Andrew Hitt and Wisconsin Elections Commissioner Robert Spindell — met somewhere in the Wisconsin Capitol and signed papers purporting to cast Wisconsin’s 10 electoral votes for the LOSING candidate.

In doing so, they broke the law.

Wisconsin, like every other state, statutorily pledges to cast its electoral votes for the candidate who wins the popular vote statewide. These fraudulent Republican electors disregarded that fundamental principle of our democracy and of Wisconsin law.

They also seem to have violated Wisconsin laws prohibiting forgery, falsely assuming to act as public officers, misconduct in public office, and conspiracy to commit criminal acts, possibly among others. They may well have also violated federal law.

By the time the fraudulent electors met, after Wisconsin’s election results had been certified and all state and federal litigation had been resolved, there was no reasonable question about who the state’s rightful presidential electors were.

Nevertheless, the fraudulent Republican electors met, improperly presuming to act as public officers and purporting to cast Wisconsin’s electoral votes for candidates the people had NOT chosen.

Those 10 fraudulent electors tried to elevate their personal preferences over the will of 3.3 million voters.

Republicans are using taxpayer money to the tune of $680,000 attempting to prove non-existent voter fraud in the 2020 election, despite a non-partisan state audit, numerous recounts of ballots, and dozens of court cases that failed to prove fraud.

Republicans committed the fraud against Wisconsin voters by attempting to nullify their votes and substitute their own will on the election.

They should be prosecuted and held accountable.