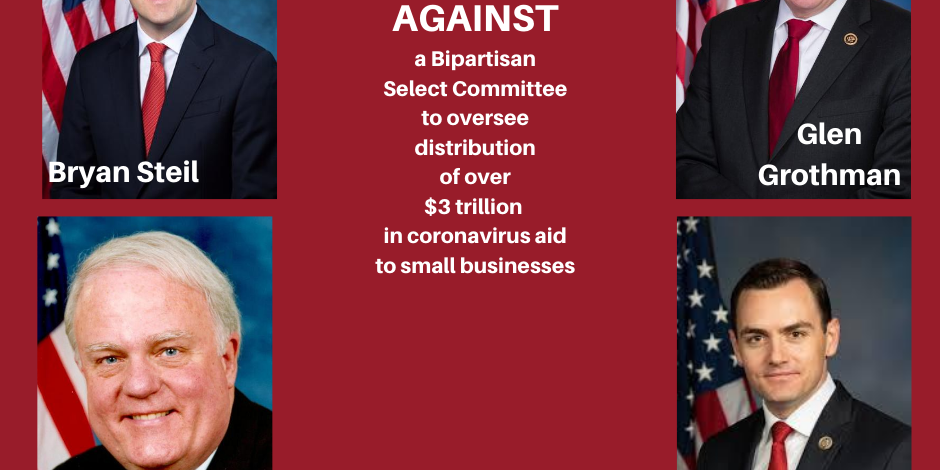 The $350 billion fund was intended to rescue small businesses with forgivable loans to cover their payrolls for two months, to prevent layoffs and to preserve jobs.

But just days after the program launched, it ran out of money.

The second round of PPP funds is anticipated to be exhausted even more quickly then the first, leaving small businesses with no financial options to stay afloat.

Many small businesses, especially those without pre-existing lending relationships with a bank, were left out. Some of the public traded companies owned by millionaires that received money meant for small businesses then turned around and laid off workers.

While Congress built in oversight to the PPP, Trump immediately began removing or attacking inspector Generals charged with governmental oversight of the funds.

Inspector General's offices exist to conduct oversight over the department or institution they’re attached to — investigating illegality and wrongdoing to bring it to the public and Congress’s attention. Their sole reason for existing is to check the executive branch’s power and make sure its vast authority isn’t abused.

First Trump removed the Inspector General of the Pentagon, the official who was to act as an independent watchdog for the coronavirus funds, Glenn Fine, upending the oversight panel.

That move came as part of a broad push by Trump against inspectors generals who are tasked with scrutinizing his actions.

A panel of inspectors general had named Glenn Fine — the acting Pentagon watchdog — to lead the group charged with monitoring the coronavirus relief effort.

"The sudden removal and replacement of Acting Inspector General Fine is part of a disturbing pattern of retaliation by the president against independent overseers fulfilling their statutory and patriotic duties to conduct oversight on behalf of the American people."

House Armed Services Committee Chairman Adam Smith said he received no rationale for replacing Fine, but said Trump was empowering loyalists over officials with expertise in his administration, calling it an "epidemic of incompetence."

Fine’s removal is Trump’s latest incursion into the community of independent federal watchdogs — punctuated most dramatically by his ouster of the intelligence community’s inspector general, Michael Atkinson, whose handling of a whistleblower report ultimately led to Trump’s impeachment.

Atkinson's removal drew swift condemnation from some Republicans, Democrats and an unusual rebuke from Michael Horowitz, the inspector general of the Justice Department who also oversees a council of inspectors general.

Trump offered no reason for removing Atkinson except to say that Atkinson had "lost his confidence."

Trump stated that any documentation that would be provided to oversight officials of the Payroll Protection Program would first have to be approved by him.

His actions following the first distribution of the Payroll Protection Program have now made it likely there will be no independent oversight into who received those funds and how.

For that reason, the House appointed a panel, to be led by House Majority Whip James Clyburn (D-S.C.), which will include 12 members — seven Democrats and five Republicans — and will have broad investigative authority over how taxpayer dollars were allocated as well as to look at the Trump administration’s preparations for the crisis.

Every Wisconsin Representative in the House voted no on establishing oversight through this panel to determine whether the PPP funds went to the small businesses that needed them or whether there was waste, fraud and abuse of the $3 trillion of taxpayer money.

Republicans say they opposed the formation of the bipartisan committee as oversight already existed in the form of Inspector Generals tasked with overseeing where and how the money was spent.

These are the same Inspector Generals Trump has been attacking publicly, removing from their positions and replacing with Trump loyalists.

The select panel, which will established as an investigative subcommittee of the House Oversight and Reform Committee, will be charged with reviewing the “efficiency, effectiveness, equity and transparency” of how relief funds are allocated; disparate impacts of the coronavirus on different communities based on demographics such as race, age and geographic region; and the Trump administration’s deliberations and communications related to the crisis.

With $3 trillion in taxpayer funds being doled out quickly and, it has already been revealed, some of it to CEOs worth millions who have turned around and fired workers, instead of to small businesses in dire need, Wisconsin Republicans voted against the ability of Congress to carry out transparent and bipartisan oversight of those funds.

While only 23% of Americans now say they have high levels of trust in the president, these Wisconsin Republicans voted on our behalf to trust Trump with $3 trillion of taxpayer money.