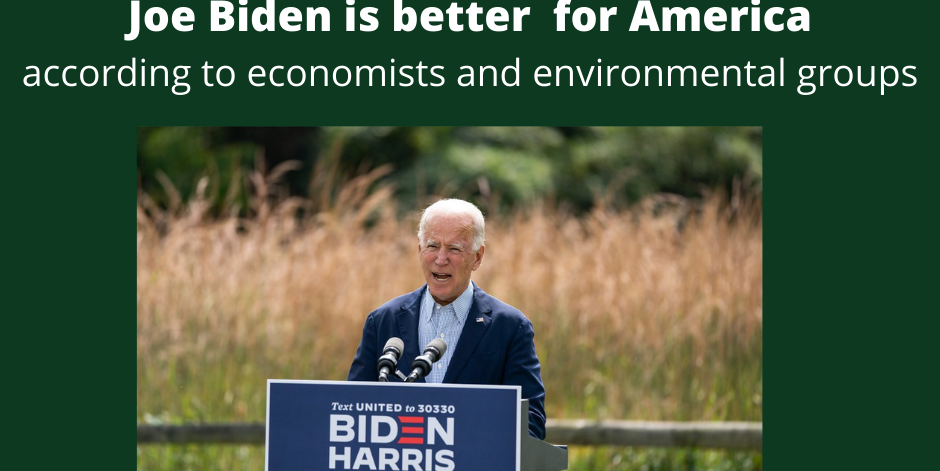 Environmentalists and Economist Agree: Biden is Better for America

“I want young climate activists, young people everywhere, to know: I see you. I hear you. I understand the urgency, and together we can get this done,” said Biden recently while rolling out his plan to combat climate change.

Both environmentalists and economists say Joe Biden's vision for America puts our country on the right path.

Biden's economic proposals would create a faster growing economy, higher wages for workers and reduce the national debt when compared to President Donald Trump, according to the non-partisan Penn Wharton Budget Model analysis.

The prestigious business school also found that Biden's proposed environmental and social programs, which are often attacked by the GOP, would largely pay for themselves.

Biden's recently released, more aggressive and extensive plan has called for the elimination of carbon pollution from the electric sector by 2035, rejoining the international Paris climate accord and spending $2 trillion over four years to boost renewables and create incentives for more energy-efficient cars, homes and commercial buildings.

“We’ve seen a pretty huge transformation in Biden’s climate plan,” said Varshini Prakash, co-founder and executive director of the Sunrise Movement, which claims more than 10,000 members. Sunrise says they will now campaign for Biden, according to Prakash

“What I’ve seen in the last six to eight weeks is a pretty big transition in upping his ambition and centering environmental justice,” she said.

In addition, Biden has been endorsed by numerous prominent environmental groups including Environment America, the League of Conservation Voters, the BlueGreen Alliance in its first ever endorsement, and also for the first time in its 175 year history, Scientific American has endorsed a presidential candidate, Joe Biden.

Why Environment America is endorsing Joe Biden and Kamala Harris