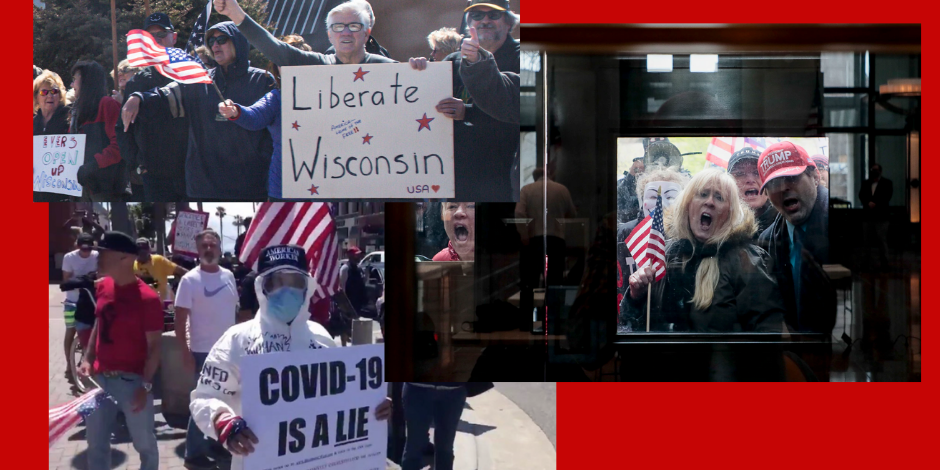 The Big Money Behind The Open Wisconsin Protests

The Big Money Behind The Open Wisconsin Protests:

Think those protests are spontaneous grassroots expressions of dissatisfaction due to the economic fallout of the COVID-19 pandemic?

They are a nationwide, organized and well-funded campaign by political operations looking to help re-elect Trump.

In Wisconsin, the pro-Trump conservative Committee to Unleash Prosperity, and FreedomWorks, founded by the Koch brothers, are behind the protests to force the reopening of the economy during the pandemic.

THE COMMITTEE TO UNLEASH PROSPERITY:

The Committee to Unleash Prosperity was behind Scott Walker’s unsuccessful run for president in 2016 but they quickly moved to supporting Trump as his tax plan saw even bigger advantages for the wealthy.

FreedomWorks for America is a super PAC formed in July 2011 that relies heavily on its big money donors. It has financial ties to the Milwaukee-based conservative Bradley Foundation, big Tobacco and the DeVos Foundation.

The Tea Party Movement was organized and funded by FreedomWorks, which trains ultra-conservative activists.

FreedomWorks is an "associate member" of the State Policy Network, web of right-wing “think tanks” and tax-exempt organizations in 49 states, Puerto Rico, Washington, D.C., Canada, and the United Kingdom.

FreedomWorks was one of the lobbying groups involved in orchestrating the April 15, 2009 anti-Obama, anti-tax "tea parties". In February 2009, the FreedomWorks website said the group was "now working with other groups to plan a massive, nationwide tea party protest day for Tax Day on April 15th, 2009"[35], the Tax Day Tea Party protests.

In summer of 2009, FreedomWorks began pursuing an aggressive strategy to create the appearance of mass public opposition to health care and clean energy reform at Congressmembers' town-hall meetings in their districts. A leaked memo from Bob MacGuffie, a volunteer with the FreedomWorks website "Tea Party Patriots," describes how members should infiltrate town hall meetings and harass and intimidate Democratic members of Congress:

"Spread out in the hall and try to be in the front half. The objective is to put the Rep on the defensive with your questions and follow-up ... You need to rock-the-boat early in the Rep's presentation. Watch for an opportunity to yell out and challenge the Rep's statements early. If he blames Bush for something or offers other excuses -- call him on it, yell back and have someone else follow-up with a shout-out ... The goal is to rattle him ..."

On Friday morning, Trump tweeted that people needed to “LIBERATE” Michigan, Minnesota, and Virginia, all states with Democratic governors. Then, Saturday, the Fox News Channel advertised “emerging rallies/protests to reopen economy” and, lo and behold, there they were on television tonight: protests in Colorado, Illinois, Florida, Tennessee, Wisconsin, and Washington.

The attempts are designed to steer the narrative away from Trump’s failings in handling the COVID-19 pandemic and foment anger and division, which were successful in electing Trump in 2016.

Despite this, the vast majority of Americans believe the economy should open slowly and safely to ensure there is not a resurgence of the virus.