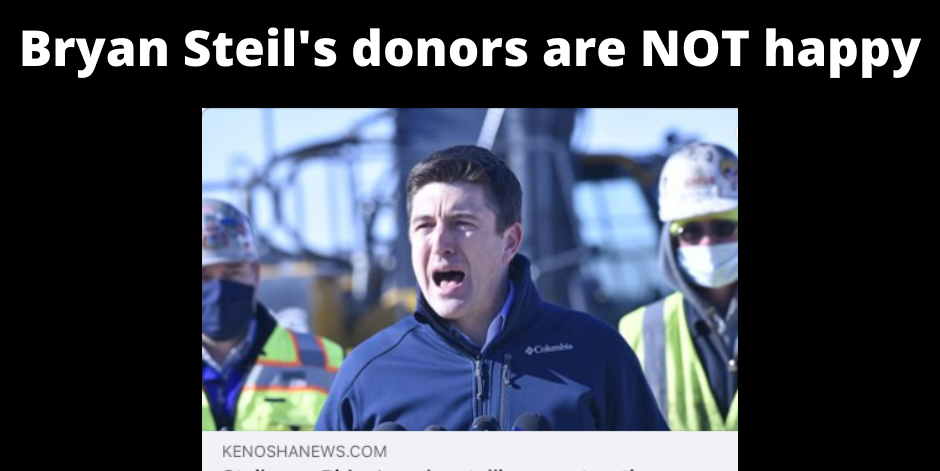 Michels Corporation, a Brownsville-based energy and infrastructure contractor, is one of the top five biggest corporate donors to Steil’s campaign efforts. Michels has donated $22,400 in the past two years. Steil, a former attorney for a plastics manufacturer, counts construction companies among his biggest donors.

While it is true that the Biden Administration’s decision will result in job loses, including to Wisconsinites, which is nothing to celebrate, Republicans like Bryan Steil have been greatly exaggerating the reality of those loses. In fact, Michel's has refused to release any information on exactly how many jobs have been lost.

While some job loses will/have regrettably occurred, the jobs Republicans claim are “lost” due to the cancellation of the Keystone XL pipeline are mostly located in the Dakota’s and the majority of those jobs didn’t exist yet - they were hypothetical jobs for which workers had not been hired. The vast majority were also to be temporary jobs.

The Biden Administration weighed the 35 permanent jobs the pipeline would ultimately produce against the negative impacts of the pipeline and made the correct decision. Investing in renewable energy and the jobs it will create is the better option for our country.

The Keystone XL pipeline was being built to move poor quality tar sands crude from Canada through the U.S. to Texas refineries in the gulf of Mexico for eventual export, across fragile indigenous and agricultural lands. That pipeline has already resulted in the spilling of 383,040 gallons of oil in North Dakota wetlands in Nov. 2019.

The Biden Administration has committed to green energy, a cost-competitive, environmentally sustainable alternative to fossil fuels. Renewable energy costs have continued to fall and renewable power generation is increasingly becoming the default source of least cost new power generation. Renewable power generation technologies are not just competing head-to-head with fossil fuel options without financial support, but increasingly undercutting them, in many cases by a substantial margin. The mature renewable power generation technologies such as hydropower, bioenergy and geothermal are ongoingly competitive. The cost of generating power from solar photovoltaic (PV) modules has fallen by 90% since 2010, and the price of wind power has been cut in half. In fact, the prices of onshore wind and solar are now even with gas and cheaper than coal and nuclear.

Jobs in green energy are also booming, even during the coronavirus pandemic, with a median salary of between $45,000-$53,000 per year in the areas of highest demand. For the same amount of energy produced, renewables required two to five times as many workers as compared to fossil fuels.

While Bryan Steil is clinging to fossil fuels to please his donors, the Biden Administration is making decisions based on cost-efficiency, job creation and what is best for our environment.

As fossil fuel jobs falter, renewables come to the rescue