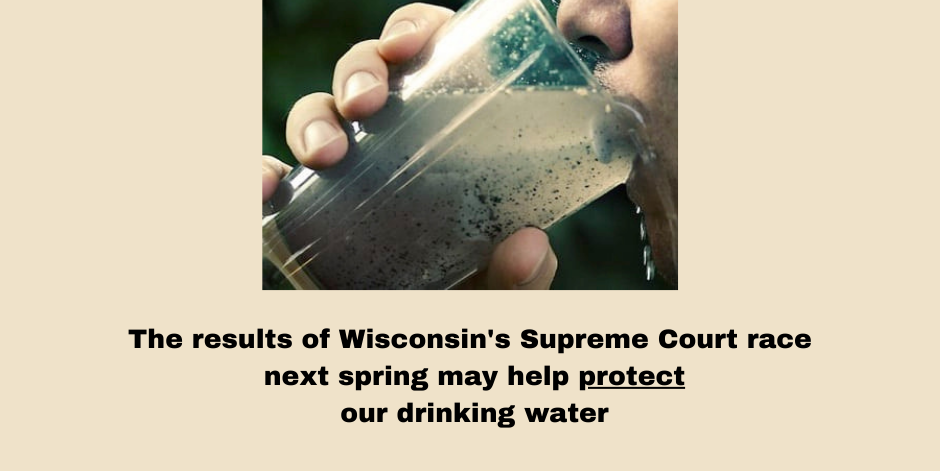 Republicans have prevented strong drinking water standards from being enacted, even as more Wisconsin towns are forced to move to bottled water

Oneida County joins a growing list of cities and towns in Wisconsin that are forced to rely on bottled water due to pollution. "There was no industry out here. We haven't a clue where this stuff came from."

The Wisconsin Natural Resources board in February failed to set standards for PFAS in Wisconsin's drinking water, after the state went through a three year process to establish such standards.

A Republican squatter, whose term on the board expired over 18 months ago, has continued to keep the majority of that board in Republican hands.

Emails show that squatter conspired with Republican lawmakers to keep his seat and keep the board under Republican control, despite the fact his term had expired and Gov. Evers had his replacement ready for confirmation. Republicans in the Senate assisted the squatter in keeping his seat by refusing to schedule a hearing for Gov. Evers' replacement to the board.

The conservative-majority Wisconsin Supreme Court sided with the squatter in a 4-3 vote, saying that just because his term had expired that didn't mean there was a vacancy on the board, thereby determining Prehn could remain on the board indefinitely as long as Republicans in the Senate didn't schedule a hearing, allowing him to block environmental policies like setting standards for drinking and surface waters.

The DNR is searching for a funding source for bottled water for Oneida County at this time, but has not yet been able to secure one.

Republicans in Wisconsin are heavily funded by the state's largest business lobby, Wisconsin Manufacturers & Commerce, which has fought the DNR’s authority to regulate PFAS, including its ability to order cleanup under the state’s spills law.

The lack of a standard thus far has complicated the DNR's ability to force polluters to clean up PFAS contamination, according to John Robinson, a former DNR employee and co-chair of the emerging contaminants work group for Wisconsin’s Green Fire.

Stella isn't the first community with private wells contaminated by PFAS. In the town of Peshtigo, just outside Marinette, hundreds of wells are affected.

The Town of Campbell, outside of La Crosse, also discovered widespread PFAS contamination of private wells and both towns now rely on bottled water for safe drinking water.

Gov. Evers is about to start his second term in office, yet over a hundred of his appointees from his first term have been blocked by Republicans in the legislature who have refused to even schedule confirmation hearings.

Evers nominees for secretary of the Departments of Administration; Health Services; Financial Institutions; Safety and Professional Services; Transportation and Workforce Development have still not been confirmed by the Senate.

Beyond state agencies, Senate Republicans have also refused to hold confirmation votes on Evers’ nominees to a number of state boards and commissions. These boards and commissions, while often under the radar, ultimately make and guide a lot of the policy decisions in state government. Throughout Evers’ first term, as previous board members’ terms have expired, Evers would have been able to install his own nominees and gain a Democratic majority.

Instead, appointees of former Republican Gov. Scott Walker have been allowed to remain in their positions with the blessing of the conservative-majority Wisconsin Supreme Court, keeping Republicans in control of these important bodies despite Gov. Evers defeating Republican candidates twice for the power to appoint his own people to those positions.

A 'complete and utter shock': Wells in an Oneida County town have 'forever chemicals' 160 times over state standards