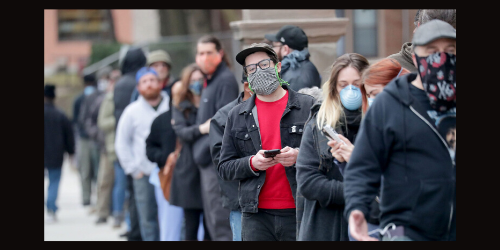 Republican legislators were forced by Gov. Evers to hold a special session to discuss whether an in-person election in Wisconsin would be safe for its citizens during a pandemic.

Those Republican met remotely because they were afraid of exposure to COVID-19.

Gov. DeWine of Ohio postponed that state's primary election the night before it was to be held.

Ohio ranks 7th in population among US states with close to 12 million residents.

In battling the coronavirus, it has been one of the most successful.

In addition to Ohio, states throughout the country also postponed their primary elections to keep their citizens safe and prevent the spread of infection:

On March 16, the US Centers for Disease Control and Prevention recommended that no gatherings with 50 people or more take place for the next eight weeks to slow the spread of the novel coronavirus.

On March 17, the White House advised all Americans to avoid groups of more than 10 and urged older people to stay at home altogether in a set of new guidelines.

That recommendation is still in effect.

On March 24th Gov. Evers issued a stay at home order in Wisconsin.

On March 27th Gov. Evers expressed concern about voter safety during a fast moving pandemic and asked to have absentee ballots sent to all registered voters.

Multiple lawsuits were filed on this date to postpone the election.

The Republican-led legislature refused Evers' call to meet about postponing the election during this period.

Immediately that same day, Gov. Evers called a special session of the legislature.
to address the safety of the election, to take place the next day on April 3rd.

April 3rd Republicans did not show up for the Legislative Special Session to discuss election safety during the pandemic called by Gov. Evers. Instead, they met remotely and gaveled in ,then gaveled out.

They spent no time discussing how to make the elections safer for Wisconsin citizens or whether they should be held at all.

April 4th A special session on election safety on Saturday was also over immediately, when Republicans gaveled in and gaveled out.

Despite pleas from Wisconsin mayors, the Dept. of Health and Gov. Evers, Wisconsin Republicans forced an in-person election in the middle of a pandemic.

In addition, it was known that thousands of absentee ballots hadn't been mailed out to voters, that Milwaukee was short over a thousand poll workers and only 5 polling stations would be open for over a half a million people.

Republicans insisted the in-person election moved forward - resulting in thousands of people waiting for hours in long polling lines during a deadly pandemic.

Voters were forced to choose whether to abide by Gov. Evers safe at home order or risk their lives going to the polls, even voters who had legally requested absentee ballots.

The only protective equipment available to voters was what they could fashion for themselves in the middle of the pandemic.

It failed, and not only because we are in the middle of a deadly pandemic.

It failed because Republican leaders didn't care to protect the people of Wisconsin.

How much time in session did Republicans spend on the safety of Wisconsin voters?