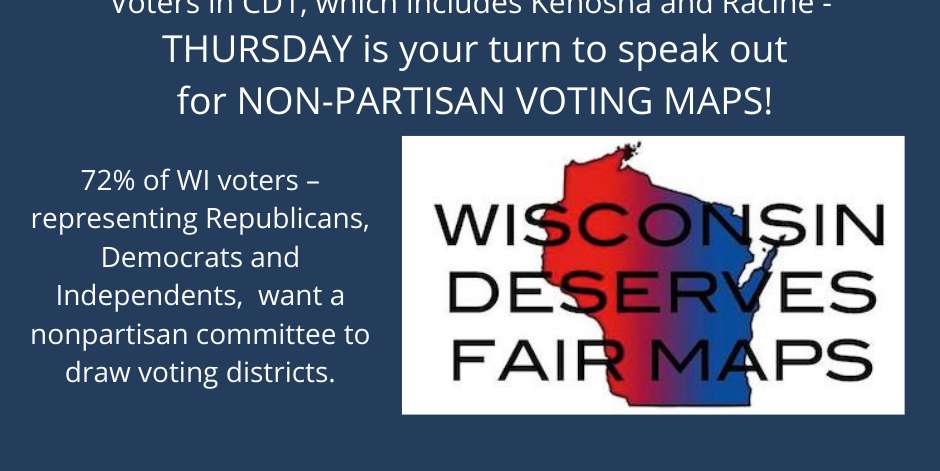 Residents of Kenosha, Racine and all of CD 1: Register to speak or submit a comment in support of non-partisan voting maps

In the 2018 elections for the Wisconsin State Assembly, Democrats won 53% of the vote, but only 36% of the seats. Unfair maps are disastrous for democratic accountability and exacerbate partisan gridlock.

Non-partisan voting maps are important to electing representatives that will listen to their constituents.

Manipulated maps are why we see Republicans trying to overturn a mask mandate despite the fact that nearly 75% of voters say they want to keep it.

It is why Wisconsin has lost $1.1 billion dollars in Medicare funding - money we paid in to the federal government but which Republicans have chosen not to receive back.

It is why the Dark Store loophole that gives considerable tax advantages to large corporations - while working Wisconsinites bear the burden - has never been overturned.

It is why, despite 83% of Wisconsinites wanting to legalize medical marijuana, it has been blocked by a handful of Republicans.

Kenosha's County Board passed a Fair Maps resolution in 2017 and on Nov. 3rd voters in Kenosha and Racine counties joined voters from all over the state in voting in favor of a non-partisan commission to draw Wisconsin's maps.

In fact, 72% of Wisconsin voters want a non-partisan commission to draw voting maps - the majority of Republicans, Democrats and Independents.

Now is your chance to speak out in favor of non-partisan voting maps to members of the People's Map Commission.

People who live in Congressional District 1, which includes all of Racine and Kenosha as well as some surrounding areas, register by Tuesday February 9th at 5 pm to make a public comment via zoom this Thursday, February 11th - you will have up to 3 minutes to comment:

To learn more about the People's Map commission: